Olympic Medalists in the Middleweight (Melbourne, 1956) 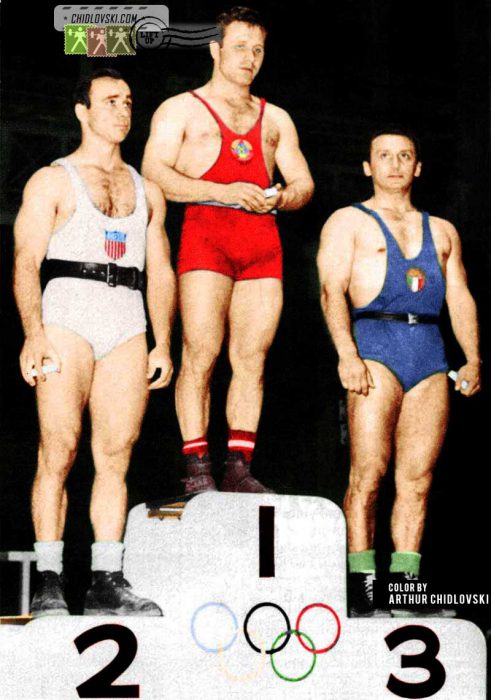 All three athletes are true legends of Olympic weightlifting. The main battle in the middleweight for the gold medals in Melbourne was between Peter George of the United States and Fedor Bogdanovsky of the Soviet Union.

It was the 3rd Olympics for Peter George. He already won a silver medal in London in 1948 and became an Olympic champion with a gold medal in Helsinki in 1952. Peter George was an unforgettable competitor and a brilliant technician. In fact, at the time, he was one of the pioneers of squat style techniques on elite level in Olympic weightlifting. For those who are interested in the story, I would highly recommend the “Secrets of the Squat Style” book by Peter George. It is now available in its Vintage Edition and it’s definitely a great read for Olympic weightlifting experts and collectors.

Fedor Bogdanovsky was an outstanding weightlifter. In his career, he won 4 European titles but couldn’t capture the World titles and seemed to develop a psychological complex in competing against legendary American weightlifters – Tommy Kono and Peter George.

Prior to the 1956 Olympics, Bogdanovski lost to Peter George at the World Championships in Vienna (1954) and in Munich (1955). Finally, he “broke a spell” in Melbourne with a world record of 420kg in total.

Ermanno Pignatti of Italy won a tough battle for the 3rd  place against Jan Bochenek, Krzysztof Beck, both of Poland, and Sung-Jip Kim of South Korea. In the end, Pignatti and Bochenek had a 382.5kg total and Italian athlete won a bronze because of a lighter bodyweight.