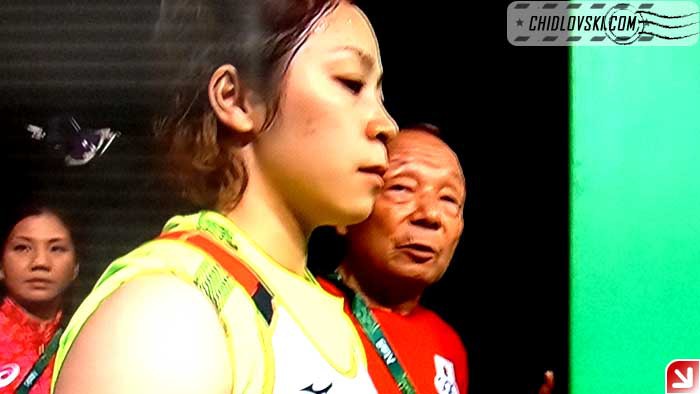 Hiromi Miyake of Japan won a bronze medal in the W48KG class in Rio. She is an outstanding athlete and proudly represent legendary Myake’s family in Olympic weightlifting.

On the photo he is about to enter the competition platform in Riocentro. Her father and coach, Yoshiyuki Miyake is right next to her.

Yoshiyuke Miyake is a world champion and Olympic medalist in Mexico 1968. His older borther and Hiromi’s uncle is Yoshinobu Miyake who won Olympics in Tokyo 1964 and Mexico 1968.

On the photo, Yoshiyuki Miyake is preparing Hiromi for the lift.

Have you seen Hiromi Miyake lifting in Rio? It was a “no guts no glory” performance. She barely escaped elimination in the third attempt in snatch and had a solid first clean-and-jerk of 105KG. Then a no lift in the attempt 2 with a questionable decision of officials on elbow touching her leg in the clean. And in the 3rd attempt, she lifted 107 KG and got the 3rd place.