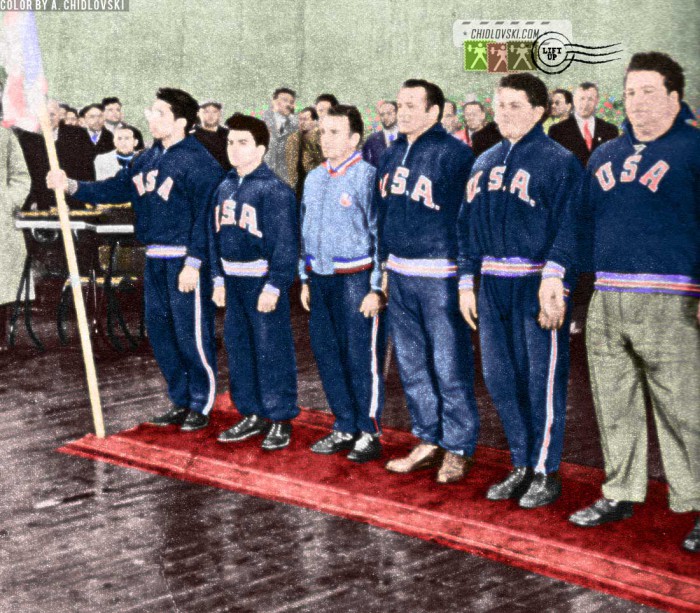 The History in Color cover photo features legendary Team USA Weightlifting during the introduction of athletes at the USA vs. USSR match in Moscow in June 1955 (left to right):

We already wrote about these matches in 1955.

It was a historic event on many grounds. In fact, it was the first EVER visit of American sports team to Russia and it was a huge event back then. The matches were a part of a good will tour of Team USA Weightlifting to Russia and Middle East in 1955 organized by the AAU and U.S. State department. The matches in Russia were held in Moscow and Leningrad in June 1955. Bob Hoffman of York Barbell brought one of the classiest American weightlifting team to the Soviet Union.

Now, with over 60 years after those matches, there is no more Soviet Union, no more pursuit of communism by Russians, and Russia is a different country. However, the tensions between the countries are back to the times of the Cold War.

Very similar and, in many ways, even worse.

At least, I can hardly picture any American group in Moscow nowadys that will be looked at like Russians looked at Tommy Kono and Paul Anderson back in 1955 – with interest, respect and admiration.

It is obviously not right and really depressing to realize that six decades afterwards people learned nothing and are back to square one.

Hope I am wrong with this observation…