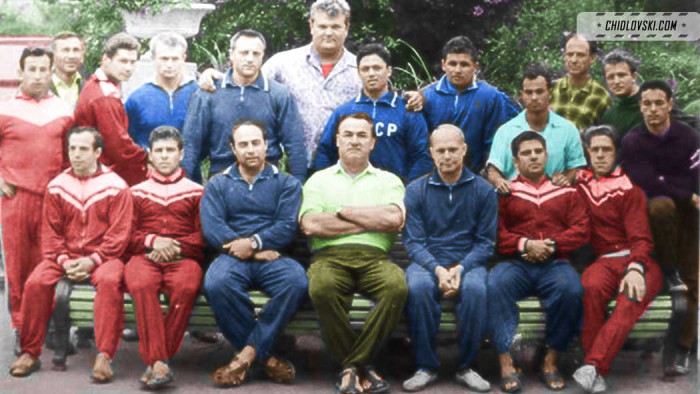 While preparing for the 1964 Summer Olympic in Tokyo, Team CCCP weightlifting gathered in August 1963 in Poldolsk training camp.

Most athletes on the photo just finished competing at the 3rd Soviet Spartakiade and the 1963 USSR National Championship that were held in Moscow in the end of July.

Two other candidates to the Olympic team, Sergey Lopatin (67.5ks, Army, Moscow) and Yury Vlasov (102.5+kg, Army, Zaporozhye) didn’t participate in the photo session. Digital enhancement  of the original photo in Podolsk was done by Arthur Chidlovski for the Lift Up.

In a year, Alexey Vakhonin, Rudolf Plukfelder and Leonid Zhabotinsky will become Olympic champions in Tokyo.

But at the moment, all are resting after the national championship and hoping to make the final cut to go to the 1964 Summer Olympics.