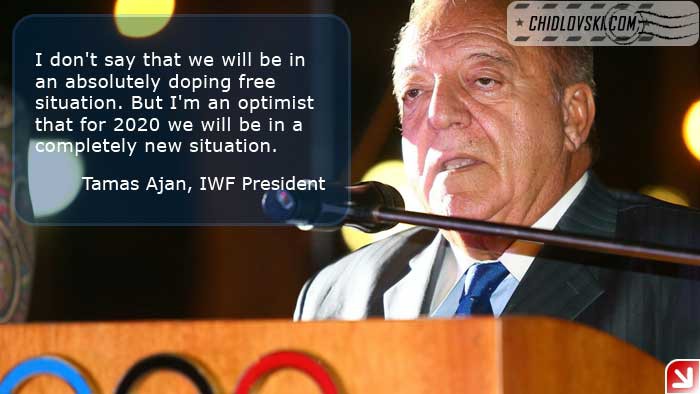 After the Games we will suspend these countries. I give a guarantee about this… (It) will be Russia, Kazakhstan and Belarus
Tamas Ajan to AFP at the Rio Games

Rio de Janeiro: The International Weightlifting Federation will ban Russia, Kazakhstan and Belarus from competing for one year after the Rio Olympics finish because of doping, its chief told AFP in an interview.

IWF president Tamas Ajan said the governing body would announce the bans at the end of September or beginning of October, adding that he expected to punish several other nations as well.

“After the Games we will suspend these countries. I give a guarantee about this… (It) will be Russia, Kazakhstan and Belarus,” Ajan told AFP at the Rio Games.

Weightlifting has long been afflicted by doping scandals and the IWF has undertaken a major crackdown on athletes using performance-enhancing drugs, often from former Soviet Union or Eastern Bloc countries.

It prevented Russia and Bulgaria, both traditional powerhouses, from competing in weightlifting at the Rio Olympics for repeated and high-profile doping offences.

The IWF had also wanted to bar Kazakhstan and Belarus but the International Olympic Committee was unable to complete retesting of samples from the Beijing and London Games in time.

The weightlifting body adopted a resolution in June that said any country who returns three or more positive drugs tests from the reanalysis of samples from the last two Olympics would be suspended for a year.

“The reanalysing is not finished. I am awaiting more information but I expect there will be some more countries that we will suspend,” said the 77-year-old Ajan.

“We wish weightlifting to be a clean sport and there’s only one way. We have to ban all the countries which violate our rules.
“I think at end of September, October we will announce which countries will be suspended,” Ajan added, saying it would be a “very painful decision” for him.

Azerbaijan, Armenia, Moldova and Turkey are the countries most at threat of being suspended, according to public disclosures showing failed tests posted on the IWF website.

Ajan’s comments cast some doubt on the legitimacy of the seven medals won by Kazakhstan and Belarus in Brazil, before the weightlifting competition, which ends later Tuesday, has even finished.

Kazakhs have won five medals at the 2016 Games — one gold, a silver, and three bronze — while Belarusians have claimed two second-place podium finishes.

There’s absolutely no evidence of any wrongdoing amongst these athletes, however, with the imminent bans stemming from cheating at Beijing 2008 and London 2012.

Several lifters are waiting to be upgraded to medal status after those who failed drugs tests are stripped of their podium finishes from London and Beijing.

The IWF banned Russian weightlifters from competing in Rio following the explosive McLaren report which detailed state-sponsored doping in the country.

It banned Bulgaria after multiple positive tests during qualification.

The IWF also punished North Korea, Romania, Uzbekistan and Moldova by reducing their allocation of lifters. Azerbaijan was effectively banned when its quota of weightlifters was stripped to zero.

Nine weightlifters who previously served doping bans, including three gold medallists, have won medals at Rio, while four others were sent home for failed tests before they were due to compete.

Ajan hopes that the IWF’s crackdown means that when the next Olympics rolls around in four years time in Tokyo, weightlifting will have shed its image as a sport of dopers.