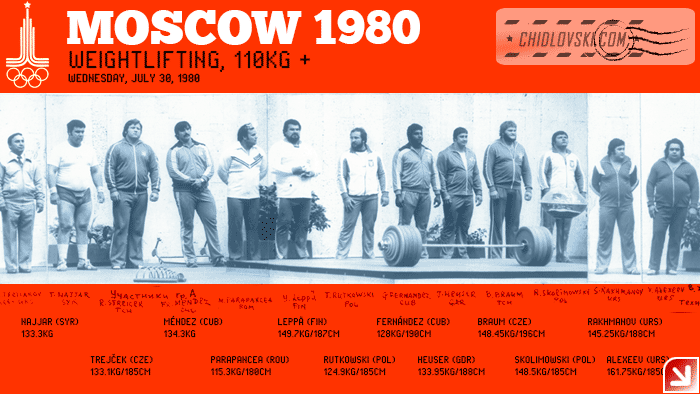 It is really a blast from the past.

Summer Olympics 1980 in Moscow. Pre-competition introduction of the super heavyweights.

What a great lineup of the strongest men in the world in the 11o + kilos class!

On the very right there are Sultan Rakhmanov and Vasily Alexeev from the Soviet Union.

Rakhmanov is a superb snatch lifter.

Alexeev has been undefeated for a decade. Since 1970! He broke 80 world records. Unthinkable amount of records!

However, he hasn’t been competing in the last two years.  How strong is he now? No one really knows…

Alexeev didn’t win at the 1980 Olympics. He bombed out at 180 kilos in the snatch part of the competition. His teammate Sultan Rakhmanov became the champion. Jürgen Heuser (GDR) won the siver medal. Tadeusz Rutkowski (POL) received the bronze one.

At the moment shown on the photo, the time froze. No one knows the score and poundage to be lifted.

We only see 12 great athletes who are about to begin the battle for the Olympic title.

Just like in the upcoming Summer Olympics in Rio. We don’t know the winners…

Where in the world is Rio de Janeiro?