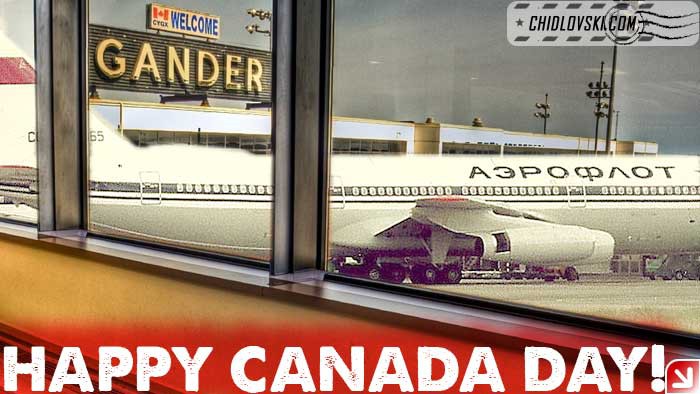 Happy Canada Day to all my friends in Canada!

The first time I stepped on the ground in Canada was in November 1989 in the Gander airport in Newfoundland and Labrador.

We were flying from Moscow, Russia to NYC, USA and had two stops on the way over – one in Shannon, Ireland and then in Gander, Canada. I never spoke to anyone from North America before. Just some theater people from Boston who invited us to perform in the U.S.

So, it was my first time when I could communicate to local folks without reference to Stanislavsky and Chekhov.

The airport was tiny. It definitely didn’t look international to me at all.

First, I thought we landed here by mistake. Ran out of fuel and landed in some local place in Canada. The waiting area was half closed for renovation and a crew of lumberjacks with construction tools was having lunch right there.

They wore construction helmets and looked pretty much like construction workers in Moscow. No other flights or passengers were there at the time and I headed right towards the lumberjacks.

“Hello” – it was a universal start that was supposed to jump start our conversation.

The crew looked at me with a little curiosity but showed no enthusiasm to talk.

“Do you speak English?” I was persistent in my exercise. “Go Canada!”

A hint of a smile appeared on their faces.

“Where are you from?” asked one of the lumberjacks.

“Russian hockey is very good!” he showed a thumb up. “Tretyak. Kharlamov. Makarov”

I knew that Canada invented hockey but I thought it was too odd to find out that lumberjacks in Gander knew about Tretyak, Kharlamov and Makarov. So, I continued:

“Do you know Makarov?”

“Of course, he plays in Calgary!”

I was shocked. I didn’t know much about how things were going with the Russian NHLers. The mainstream media took the side of the Soviet head coach in the tug war between coach Tikhonov and the players. Tikhonov wanted to keep his stars in the Red Army team. The players wanted to move on and to go overseas to play in the NHL. The Soviet media had very little coverage of the first Soviet players in North America. They were off the public radar in the newspapers and TV.

So, I was talking to Canadian construction guys in Gander and they were telling me how Makarov, Larionov and Krutov are doing in the NHL.

Then I went to the duty free shop and bought a super cool bag with a big red maple leaf on it. I wore this bag for two years.

“What did you talk about to the Canadians?” our director took me aside on the plane and wanted to know if I knew those guys.

“About hockey. Makarov is doing really well in Calgary!”

“Really?” the director gave me a smile. He loved hockey too.

That was 27 years ago. I never talked to my first Canadians, the lumberjacks in Gander. If they still remember our small talk in 1989, Happy Canada Day, guys!

Happy Canada Day, to all my friends in Canada!