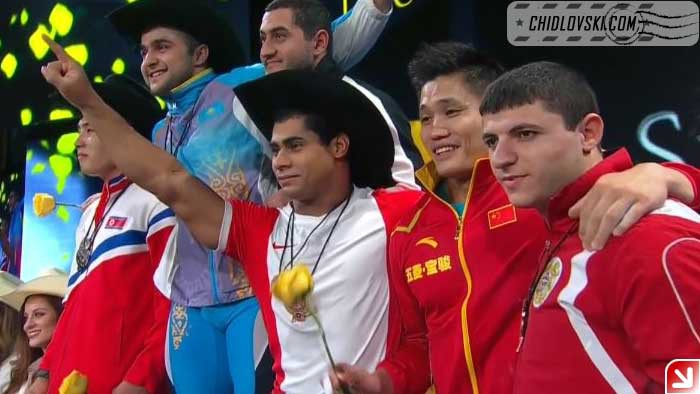 The line up in the 77KG weight class was very impressive. There were 6 athletess at the medal ceremonies after it was over.

In fact, several notorious athletes were to join the battle for the gold in Houston at the 2015 World Championship. Three top totals in the startup listing belonged to Xiaojun Lu (China), Kwang Song Kim (PRK) and Tigran Martirosyan (Armenia). All three with 370 KG in total. With 5KG below them, there were young and promising Ying Su and Andranik Karapetyan. Silver medalist of 2015 Europeans Victor Getts also had a shot for medals.

In the snatch, Tigran Martirosyan, 2010 world champion and bronze medalist of 2008 Summer Olympics, surprisingly bombed out. Xiaojun Lu had solid snatch lifts and won gold medal in the first lift type. He tried to beat his own world record but failed to snatch 177KG in his third attempt. After the snatch program, Lu was +4KG compared to Kwang Song Kim ang +8KG compared to Andranik Karapetyan that took second and third place respectively.

Clean-and-jerk is often called the “king lift” of Olympic weightlifting. It goes after the snatch and quiet often athletes that excel in this lift win the competition despite a lower results in the snatch program. It was the case in the competition tonight. It all started with Xiaojun Lu who bombed out with 203KG and Ying Su barely lifting 190KG just in the 3rd attempt. Having the main contenders out of the competition inspired others for a medal battle.

Victor Getts had a good night. He had a 3-in-3 snatch and a 2-in-3 jerk. He was rock solid and strong but not strong enough for a medal this time. He did improve his total by 7KG but his opponents outlifted them this time. Mohamed Ihub from Egypt showed phenomenal lifting in cj which allowed him to finish on the third place. Kwang Song Kim from North Korea was solid all night but finished only second to Nijat Rakhimov from Kazakhstan.

Rakhimov was simply outstanding in the clean-and-jerk. He lifted 207KG which gave him the first place and in the last attempt went for 211KG to beat the world record set by Oleg Perepechenov in 2001. No record this time but a fantastic night for Nijat Rakhimov in Houston, TX.

Good lifts and congrats to all!