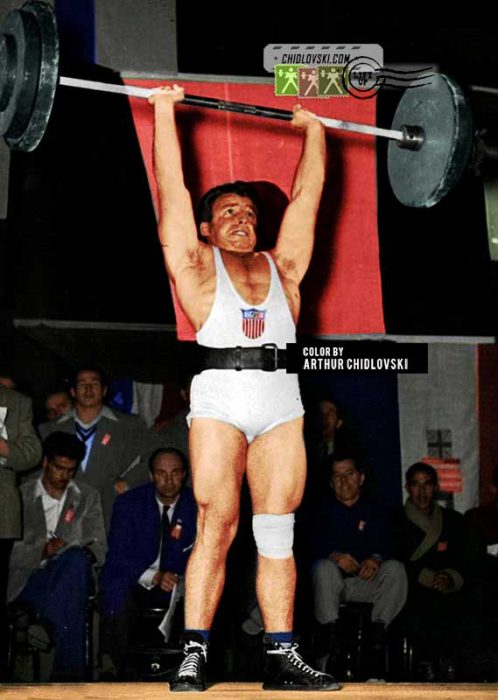 History in Color:
October 14, 1950, Paris, France – U.S. lightweight Joe Pitman of the York Barbell Club, York, PA, USA performs a press lift on his way to a gold medal  in the 67.5kg weight class at the 1950 World and European Championships on the Stage of the Palais de Chaillot in Paris.

The final standing of the light heavyweight medalists in 1950 was the following:

A native of Laconia, NH, USA and a U.S. Navy veteran of the World War II, Joseph “Joe” Pitman (1924-2018) was one of the key American athletes in the U.S. Olympic weightlifting in the first decade after the war. Joe competed in the lightweight class for the Chambersberg, PA Club and then for the world famous York Barbell Club and won 10 gold medals at the U.S national championships (1947-1951, 1953-1957).

He competed in the major international competitions of the time. Being a part of the U.S. weightlifting team, Pitman represented the country in the lightweight at the 1948 Summer Olympics in London (8th place) and won two gold medals at the Commonwealth Games – in Buenos Aires (1951) and in Mexico City (1955). He also won a gold (1950) and two silver medals (1949, 1951) at the World Championships.

Joe Pitman competed for Team USA during a legendary international Good Will Tour in 1955 when the U.S. lifters competed in the weightlifting matches in the Soviet Union, Egypt and Iran. He also competed in the lightweight class in the 1958 USA vs. USSR matches in Chicago, Detroit and New York.

Joe Pitman held Bachelor’s and Master’s degrees and, after retiring from competitive weightlifting, worked as a teacher and principal at the Indian River County School System.