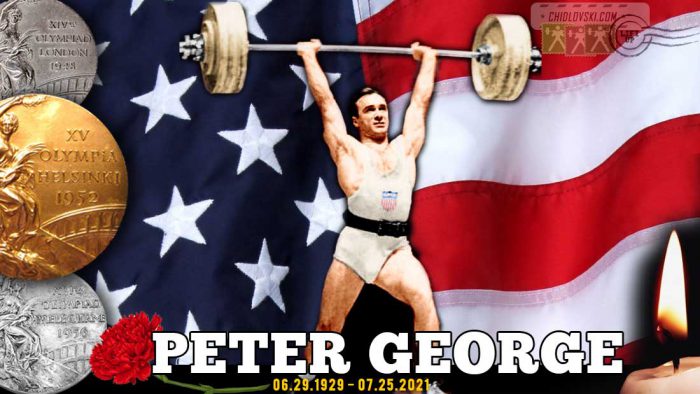 Very sad news for the world of Olympic weightlifting…

Legend of this sport, Dr. Peter George passed away on Sunday. He was 92.

I don’t think Peter George needs special introduction to anybody who to some extent connected with the weightlifting world.

He was one of the most successful and decorated lifters of the generation of the first post World War II decades. It was the generation of the winners and the era of the so-called American Weightlifting Classics. The U.S. weightlifting team dominated the world and Peter George had written his name on the same page as Tommy Kono, Norbert Schemansky, John Davis, Stanley Stanczyk…  Each name deserves a book within a history book. And Peter George was one of the classiest acts among the legends.

The career track and results of Peter George are certainly very impressive. It’s only a part of the life story that makes him a true legend of this sport. His presence on the platform, immaculate mental preparedness for any challenge on the weightlifting platform and being a part of the classiest weightlifting team that dominated the world of weightlifting at the time.

And this is only a weightlifting side of his biography. Dr. Peter George had a brilliant career in sports, outstanding career as an orthodontist after retiring from sports and enjoyed success as an educator in medical school and a businessman in his clinic.

There are so many things I want to say and I need to say about Peter “Pete” George. He often asked me to call him Pete in our conversations. I couldn’t do it. And today, on such a sad occasion, when he is no longer with us, I can’t get used to the thought that he is no longer available for a comment, a story or any input about literally everything that took place in weightlifting in this long and remarkable decades with his presence in this sport.

My deepest condolences to his family and friends.