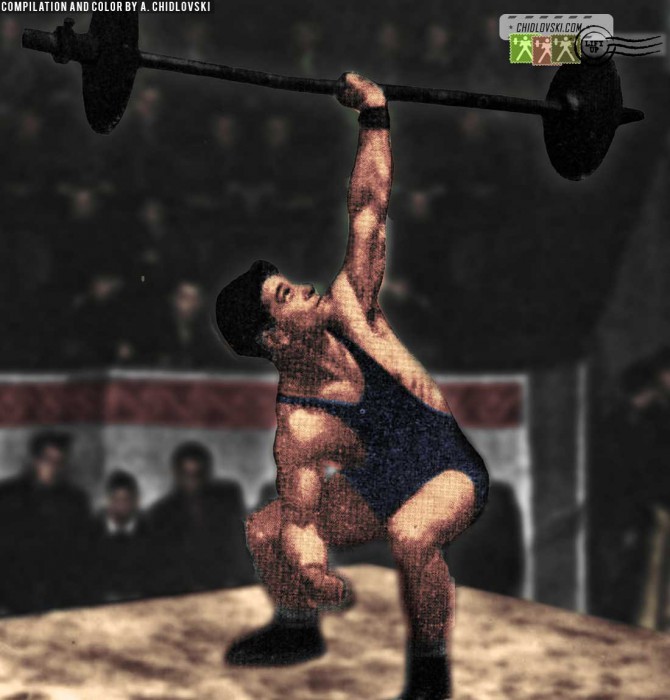 History in Color:
One of the pioneers of Olympic weightlifting in the USSR, Israel Mekhanik (1909-1989) performs a one-hand snatch in the mid 1930s.

Israel Mechanik competed in the light weight for the Lokomotiv club of Moscow, Russia before and after WWII. From 1934 to 1949 he won medals 12 times at the USSR Championships. He won the European title in 1947 and the USSR title in 1939.

Mekhanik set 1 world record and 15 national records in his career in Olympic weightlifting.

After his retirement as an athlete, Israel worked as a coach. Being a coach of Team CCCP, Mekhanik was famous for his superb individual work with athletes. He was able to prepare numerous athletes for impressive wins in the international contests. In many cases, his students were either back-ups or not selected to the national team as leads in their weight classes. For example, Israel Mechanik was responsible for the Olympic gold by Rafael Chimishkyan at the 1952 Summer Olympics in Helsinki, D.Ivanov’s gold medal at the 1954 World Championship and several other impressive victories.

Mekanik was a decorated WWII veteran. He served in the special ops units on the occupied territories of the USSR.