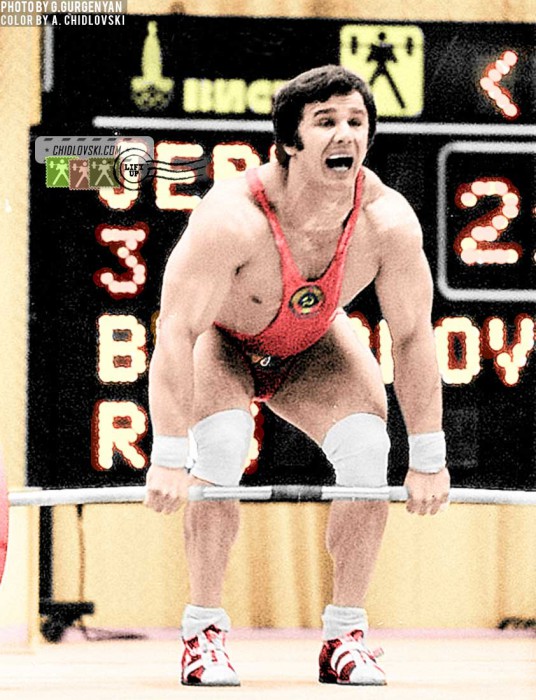 July 31, 1979, Leningrad, Russia – Gennady Bessonov of Shakhty, Russia competes in the 90kg weight class at the 1979 USSR Championship and Spartakiad.

Gennady Bessonov (b. 1954) needs no special introduction for the Iron Game fans. He was one of the popular Soviet light and middle heavyweights in the 1970s.

Bessonov is a graduate of the famous Olympic weightlifting school of a small Southern Russia town of Shakty. He was coached by Viktor Dorokhin. Dorokhin wasn’t as flashy another well-known coach Rudolph Plyukfelder (also from Shakhty) but very solid and successful. He prepared quiet a few international level champions and Bessonov was one of them.

Bessonov set 3 world records and was a 2x World Champion (1977, 1979), European Champion (1977) and won medals at the USSR championships on several occasions.  Ironically, with all his outstanding career results, Bessonov never won gold at the USSR championships. The cover photo features Gennady lifting at the 1979 USSR Championship where he won a silver medal and lost the title to Valey Shary by 2.5kg in total. Gennady snatched 167.5kg and jerked 210kg. His total was 377.5kg.

A year later, Peter Baczako of Hungary won an Olympic gold medal with the same total. But this is another story.