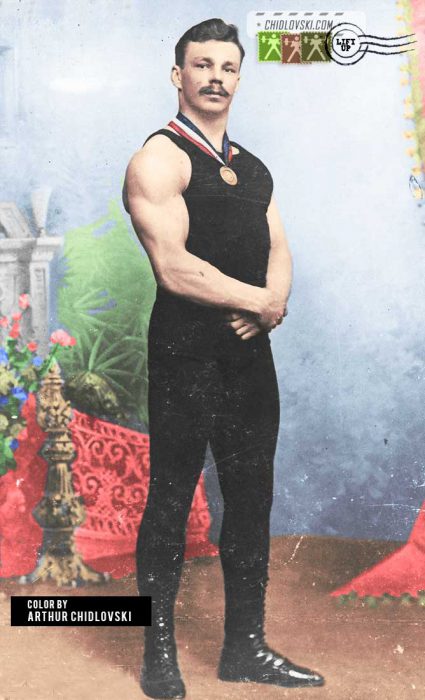 History in color:
The cover photo features our portrait of Sergey Eliseev (1876-1937) of Ufa, Russia, one of the first professional strongmen in the world, kettlebell and Olympic weightlifter of the early era in the Iron Game history.

Sergey Eliseev is considered the first Russian weightlifter to win the World championship. It happened in Milan in 1899 when Eliseev jerked 86.8kg (right hand) and 143.3kg (two hands) and pressed 116.7kg. He was the lightest contender of the tournament  with his bodyweight of 92.2kg.

At the 1903 World Championship in Paris, Eliseev won a silver medal.

Besides purely weightlifting, the early Russian strongmen competed in wrestling and in various types of impressive lifts somehow similar to the strongman’s contests today. There were no official Olympic weightlifting federation, no official set of rules and no regular tournaments held between the lifters at the time.

Still, the world kept the names of the first athletes that competed in the early contests. According to various Russian weightlifting researchers, it was Sergey Eliseev that is considered as the first Russian world champion.