“There Is Much More To Weightlifting Than Only Doping” 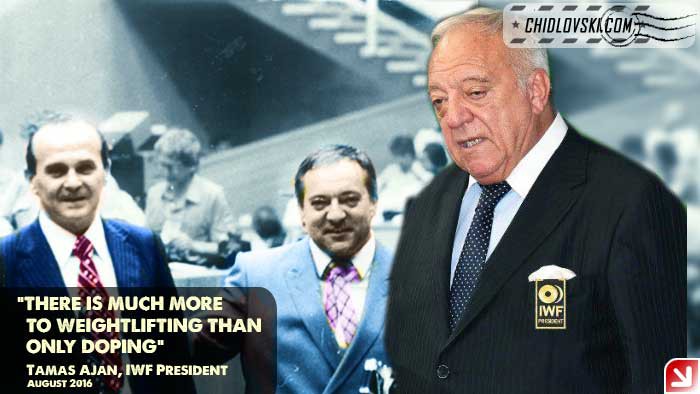 Well said. Ironically, the story repeats itself. Should the whole nation or the whole Olympic discipline in sports be punished for wrongdoings of selected individuals?

Here is the whole article.

There is much more to weightlifting than only doping.
Tamas Ajan, IWF President

RIO DE JANEIRO, August 18, 2016 (AP) — The weightlifting competition at the Rio Olympics played out under a cloud of suspicion and scandal so severe that there are fears the sport may get booted out of future games for doping.

Competitors who finished outside the medals talked openly about their hopes of moving up in the standings once lab results came back for opponents they found suspicious. Four athletes have withdrawn or been disqualified so far after testing positive, including one who was taking small doses of a substance typically used as rat poison.

Russia’s weightlifting team was banned for bringing what the International Weightlifting Federation called “disrepute” to the sport. And two more powerhouses, Kazakhstan and Belarus, are set to miss next year’s world championships over mass doping.

It has all led to some deep soul-searching for the sport as leaders hope it not only remains in the Olympics but also cleans up its act once and for all. Once a highlight of the Olympics, weightlifting is on the program for 2020, but there is no guarantee beyond that.

“I hope we don’t have this kind of situation,” International Weightlifting Federation president Tamas Ajan told The Associated Press in a recent interview when asked if his sport risked losing its Olympic status. “I hope that what weightlifting is doing is good enough and we are on the program.”

Ajan said he hoped 2015 would be a year of shock therapy that would result in a healthier sport, but competitors in Rio de Janeiro were not confident their sport was clean.

Mercedes Isabel Perez of Colombia took fourth in the women’s 63-kilogram event, but was practically exuding confidence that she’ll eventually win a medal.

“We have to wait for the doping tests,” she said. “Who knows? Being fourth is the best because if something happens, I’ll just climb on that podium.”

Recent developments show she may have a point.

Izzat Artykov of Kyrgyzstan was kicked out of the games and stripped of his bronze medal in the men’s 69-kilogram division Thursday after failing a test for strychnine. It’s a toxic substance typically used as a pest killer, but in smaller doses, it can help muscular performance.

Two Polish weightlifters, one a former gold medalist, were also sent home before competing, and a Taiwanese world record holder withdrew hours before her event over drug test abnormalities.

Of 45 medalists from the 2012 London Olympics, at least 20 have failed doping tests at some stage of their careers and as many as 12 medals from London could be reallocated after samples were retested with new technology this year.

The weightlifting federation had tried to ban Kazakhstan and Belarus from the Olympics as well, but Ajan said the International Olympic Committee had been too slow in processing doping cases in time for the ban to meet federation rules. The countries ended up winning seven medals, one of them a gold medal for Kazakhstan’s Nijat Rahimov, who only returned from a two-year doping ban last year.

He set a world record in the clean and jerk to win gold — a result he credited to an intense training regimen. But his opponents had doubts, questioning how he could accomplish such a feat so soon after a lengthy suspension.

“In a very short time it cannot happen like that,” Egypt’s Mohamed Mahmoud said.

Ajan said the Soviet Union had left a legacy of steroid use that was hard to uproot.

“We had to take this decision even if it is painful,” Ajan said of banning Russia. “To use some forbidden substances, this was a part of the Soviet training methods … Some countries here from the former Soviet Union, they use the same possibilities. I think in the near future they will stop using everything. We try to give very strong pressure and we continue very strong control also in the future.”

While most doping cases are from ex-Soviet or Eastern European countries, medal contenders like China, Iran and Taiwan have all also racked up drug offenses.

Ajan said his organization tested a higher proportion of its competitors than any other major sports federation, and planned to start storing samples from more competitions for retesting later.

“Not one sport has done as many things as we have done,” he added.

Russia, however, will be back at the world championships next year, Ajan said. Asked whether it faced any extra punishment beyond the Rio Olympics, Ajan praised Russia for its academic and scientific approach to training, and the Soviet Union for “basically a very strong and good contribution for the sport because performance was increased.”

Crowds for weightlifting in Rio were enthusiastic, but rarely filled much more than half of the arena near the Olympic Park, something Ajan blamed on spectators getting lost because of a lack of signs. The crowd relied heavily on delegations of athletes and coaches from competing countries, and a big group of fans from Colombia, one of the few countries in the western hemisphere where the sport remains popular.

As weightlifting tries to regain its credibility, it will have to try to shift the focus back to superhuman lifts, not chemical boosts, and show that, as Ajan put it: “There is much more to weightlifting than only doping.”