One of the biggest sports legends of all times and nations, Muhammad Ali died at 74 in Phoenix Arizona. He was a professional boxer, one the most significant heavyweight figures in the history of boxing.

In addition to his sports championship, he championed in civil rights and anti-establishment movements.

In the early 1960s, he converted to Islam and refused to serve in the Vietnam War. He served as a symbol of a strong and vocal man standing up against the establishment, going above limits and barriers, race and religion. On a personal front, he went through a a 32-year long battle with Parkinson’s disease.

The man once proclaimed himself loud and clear as “the greatest of all times”. He lived his life to suit the title he chose for himself.

Back in the days of glory of Ali in the boxing rings, I was a kid in Russia.

Purely by accident, I ended up learning the boxing skills in the Dynamo Moscow club.

Looking back at it now, I realize that I was a misfit for the boxing club.

The coaches were preparing us to win the titles at the Olympics and the Worlds. As for me, I merely tried to learn a few tricks to be able to stand up for myself on the street.

After a year of training in the club, our head coach called me for a pep talk and said that it will be OK if I stop coming to the club.

“You are not really a boxing material,” said the coach.

He knew what he was saying. He won 10+ national titles and coached Soviet middleweight boxer Lemeshev to the gold medal at the 1972 Summer Olympics in Munich.

I was out my league to argue my case. I didn’t quit training but I knew that it was over.

A few weeks later, I told the story to my father.

He was in the hospital after the surgery. We went outside for a walk.

It was turning dark and we were stopped by three guys.  One of them had a knife and told my father to give him the money we had on us.

The coach  was right.

Fighting wasn’t in my nature. But when I saw a knife at my father’s throat something happened to me. I jumped on the guy with the knife and ended it with two punches.

The guy fell on the sidewalk motionless.

Technically speaking, it was a KO. I stepped aside and lifted my arms in the air. Just like Muhammad Ali in the photograph.

The other two opponents ran away.

“I didn’t know that you can fight like this,” said my dad.

It was a moment of pride for me.

It was short and sweet.

The story didn’t have a happy end of a Hollywood movie. The police arrived to the place of the accident.

The report went to my boxing club and I was officially expelled from the boxing sport. I was not supposed to use my boxing skills on the street. It was against the rules.

Where else did they expect me to use these skills? Go figure.

Unlike Ali, I complied with the authorities. I left boxing and went into Olympic weightlifting.

But this is another story.

As for Muhammad Ali, a few years later he came with a visit to Moscow. It was in 1978 and it was the prime of the Cold War. Ali came on hos own. I don’t think the U.S. government approved this stint of the boxing legend.

Ali had a friendly boxing rounds with the Soviet champs Zaev, Vystotsky and Gorstkov. He looked out of shape but still outmaneuvered the opponents on the ring. Then he met with Leonid Brezhnev who gave him a vase with his own picture and signed his autobiography book for Ali. 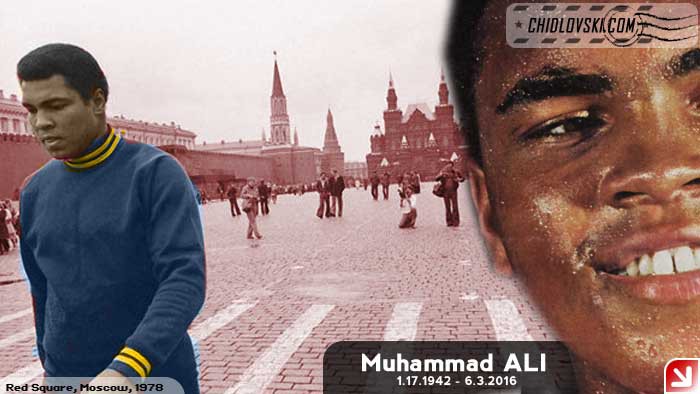