Will Keith Jones Be Waiting For Alex Radulov In the JFK? 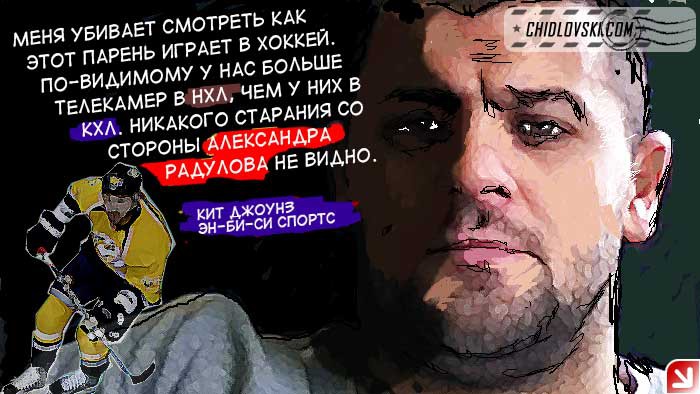 There is a word in the air that Alexander Radulov might be back to the NHL.

Thanks to Slava Malamud @SlavaMalamud, there are more and more info on Radulov negotiations in NYC and the list of potential teams to play for include Colorado, Detroit, Florida and Washington.

Just for the sake of curiosity, I looked up the “Who Wants the Russian Hockey Players?“, an article in Russian about Alex Radulov published here three years ago.

Well, it was three years ago and the cover picture used the quote by Keith Jones who ripped Alex Radulov apart at the NBC Sports. It was about his devastating play for the Nashville Predators in the playoffs in 2012.

We are re-using this cover picture and linking back to the old article again.

There were many changes that took place in the last three years. In many ways, things got really worse… We don’t want to go into this direction, but a few things seem to remain the same.

Did Alex Radulov improve his play by the NHL standards lately?  Is his play in defense better? Is Radulov a different man compared to three years ago? Did Keith Jones change his mind on how Russians are playing in the NHL?

Personally, I am not sure if the strict followers of North American game and training style, Keith Jones, Mike Milbury and many others changed their mind about the classical Russian and European hockey. Obviously, Radulov is a super talented player. He is a top notch scoring talent and he can be a great addition for the NHL teams around… for the right team and under the right circumstances.

Anyway, with all these said, will Keith Jones be waiting for Alex Radulov in the JFK airport this time?