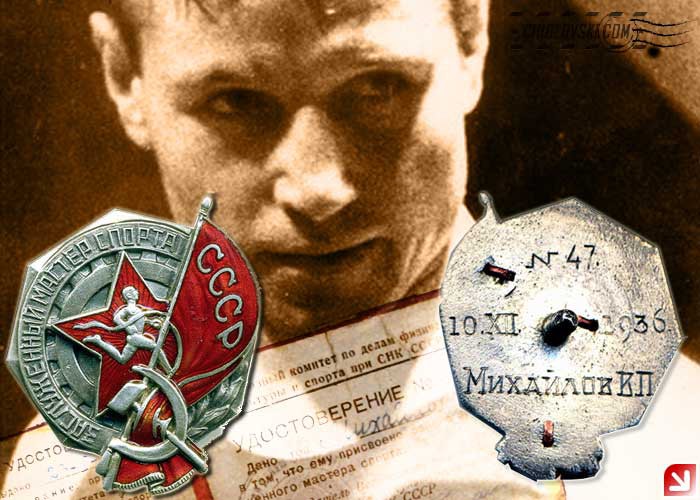 I am looking at the badge of honor for the Soviet Sports Hall of Fame.  Each badge has a unique number and the name of the owner engraved in the back. This one says:

I wasn’t supposed to be there.

I joined the Dynamo boxing club because I wanted to learn how to stand up for myself in the street fights.

Here we signed the paperwork not to use our skills on the streets. They teach us how to become champions in the Olympic ring.

“What is your name, young man?” – someone’s hand touched my shoulder.

I am 12 and I am fiercely kicking the boxing punch bag in our club. The person in front looks an ancient man to me. He moves in the hall like an old tiger. Slowly and gracefully. He moves me aside and shows me the right way of punching the bag.

He call all of us “young man’. It is very uncommon and overly respectful for 12-year olds.

“Do you see the difference?”

I nod and try to imitate his technique.

He shows me his left fist.

He swiftly swaps it to the right fist:

“78 knockouts!.. Do you know why? Because this is the way you do punches! Understood? Continue!”

He continues his walk in the hall.

At home, I open the encyclopedia book. He is a legend. His name is Viktor Mikailov. He was the first boxer to be inducted into the Soviet Hall of Fame. He won the USSR title in the heavyweight although his bodyweight was only mid heavyweight. He had 117 fights. Lost only 9.

I very proud to be cached by a legendary champion.

I failed to become a boxer. It wasn’t really mine. But for a couple of times I was able to handle a street fight friends and myself.

Thanks for you lessons, Mr. Viktor Mikhailov!