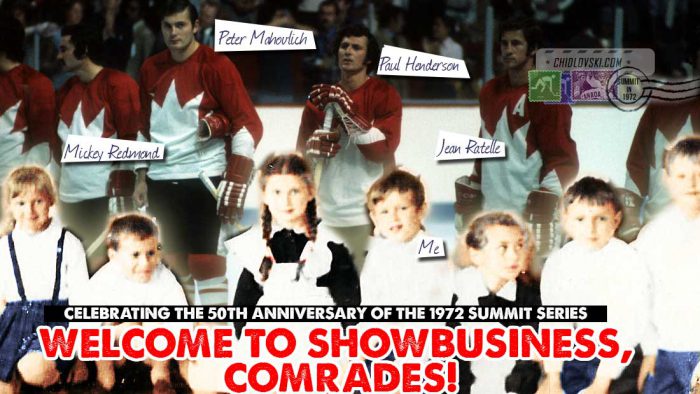 The Montreal Forum 18,818 crowd went wild when the announcer began to introduce Team Canada players on the Series opening night.

Saying that it was a warm roar of appreciation is saying nothing. I was just a kid and it scared me. First, I thought it was an earthquake in Canada or something really terrible happened with our TV set in the living room.

The Russian line-up introduction went quiet with some polite round of applause. One needed to be deaf not to see the difference.

Kharlalalalalamov? Who? Say it again…

Yacokoocokooshev? Who the hell is this? Damn, they need to shorten up these long last names before they learn the game from us.

The first visual impression was a total knock out. The Canadian players looked big. Or should I say that they looked rather huge. Newly designed Team Canada’72 jerseys were simply fantastic. Compared to the NHL pros, the Soviet champs looked like some obscure factory hockey team.

The whole Canadian line-up reminded a bunch of Hollywood stars showing huge smiles whenever not occupied with their chewing gums. I could have sworn that the whole roster was chewing gums. For some reason, chewing gum was a taboo by the Soviet standards of sports. In my opinion, hockey players chewing gums during the game looked as strange for Russian fans as the unsmiling faces of Soviet players for the North American fans.

Needless to say, hockey was immensely popular in Russia. But it was still a sport, not some TV show or motion picture with a star cast. The game was run rather by the Olympic ideals of sportsmanship than the commercial showbiz principles. If there was any selling point in Russian hockey of the 1970s, it was the sports competition itself not the look of its performers. The look-and-feel standards were rather different compared to the ones in the NHL. The welcome-to-the-70s long hair style of the Team Canada players went totally against the short sports crew cut look propagated by the Soviet sport officials of that time.

On that September Series opening night, I was for the first time introduced to the hockey as a show business. It happened before the first face-off of the Series, before Phil Esposito scored the first goal with a mere 30 seconds in the game and well before the final buzzer marked the 3-7 shocking evidence that the first impressions can be misguiding.

There were many things that both teams learned from each other during the Summit Series. The first lesson was given during that intro of the players in front of the Forum crowd in Montreal. “Welcome to the show business, comrades” sign was written in the air. It was new and tempting. Who knows – maybe it’s something that attracted me in hockey in the last 30 years*.

Note:
* I wrote the original article for the 30th Anniversary celebration at the Summit in 1972.