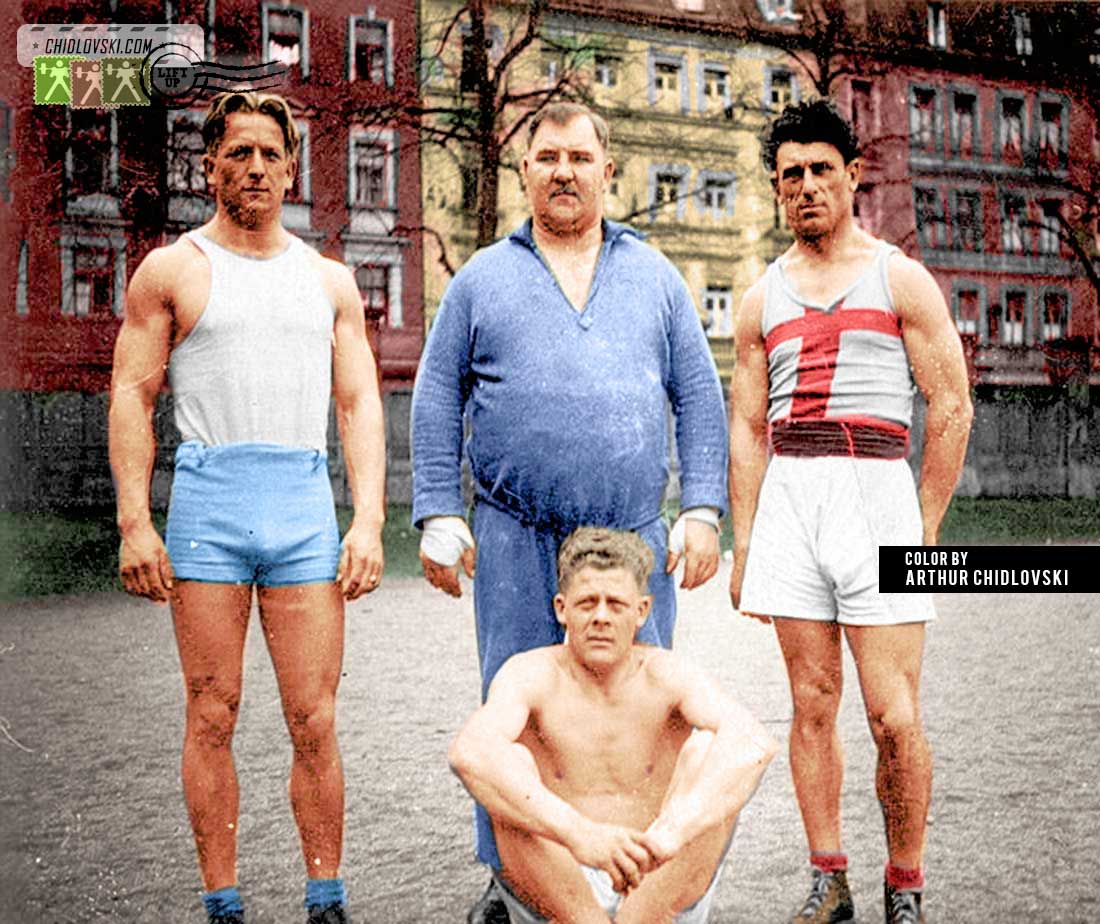 The black-and-white original comes from the archives of Carlo Galimberti and features true legends of Olympic weightlifting of the pre-World War II era. All three athletes in the top row were Olympic champions and participated in numerous Summer Olympics of the time.

His family moved from Argentina to Italy and Carlo Galimberti lived and worked in the Milan’s area. As an athlete, he won 18 consecutive national titles.   He was a firefighter by trade and served as a chief of squad. In 1939, Carlo Galimberti died in the line of duty as a result of the burns he received after the explosion of a boiler the building where his team was evacuating people from.

2x Olympian, heavyweight Josef “Sepp” Strassberger (1894-1950) competed and won Olympic medals for Germany in Amsterdam (1928, gold) and in Los Angeles (1932, bronze). He wanted to compete in Berlin in 1936 but he was  already 42 – younger and stronger Josef Manger replaced him on the Olympic roster. Strassberger was the first Bavarian to win gold at the Olympics and was a dazzling personality. The story says that he did enjoy his beer and cognac drinks, forbidden substances in the Olympic sports.  Supposedly, despite an alcohol ban in the United States during the the 1932 Summer Olympics, Sepp managed to smuggle a draft beer in the kegs marked as a massage oil. However, on its way to the Olympic village in LA the beer disappeared. Many eyewitnesses saw Sepp crying after this happened.

Rudolf Ismayr (1908-1998) was a 2x German Olympian in the middleweight and a winner of a gold medal and a silver medal in Los Angeles (1932) and in Berlin (1936) respectively. Ismayr was a well-known sports celebrity in Germany. As an athlete, he was one of the pioneers of squat style techniques in weightlifting. Besides his solid sports results, he was a successful sports businessman. He generated an impressive income by endorsing commercial products.

He was selected to read the Olympic Oath at the opening ceremony of the 1936 Olympic Games in Berlin. As many German champions of that era, he was used by the Nazi propaganda and actually joined the NSDAP (Nazi) party in 1937. During World War II, Ismayr fought on the front and was a POW after being captured by the British Army. After the war, unlike most of the German sports champions of the 1936 Summer Olympics in Berlin, Ismayr cut all ties with the Nazis after World War II and joined the German Peace Union (DPU). He became a popular peacemaker and nuclear weapons opponent.

As for the fourth athlete on the photo, I wasn’t able to positively identify him at this stage. My initial guess is that he is Attilio Bescape of Team Italy. Please let me know if you know the name of the weightlifter sitting in front of Sepp Strassberger on the cover photo.