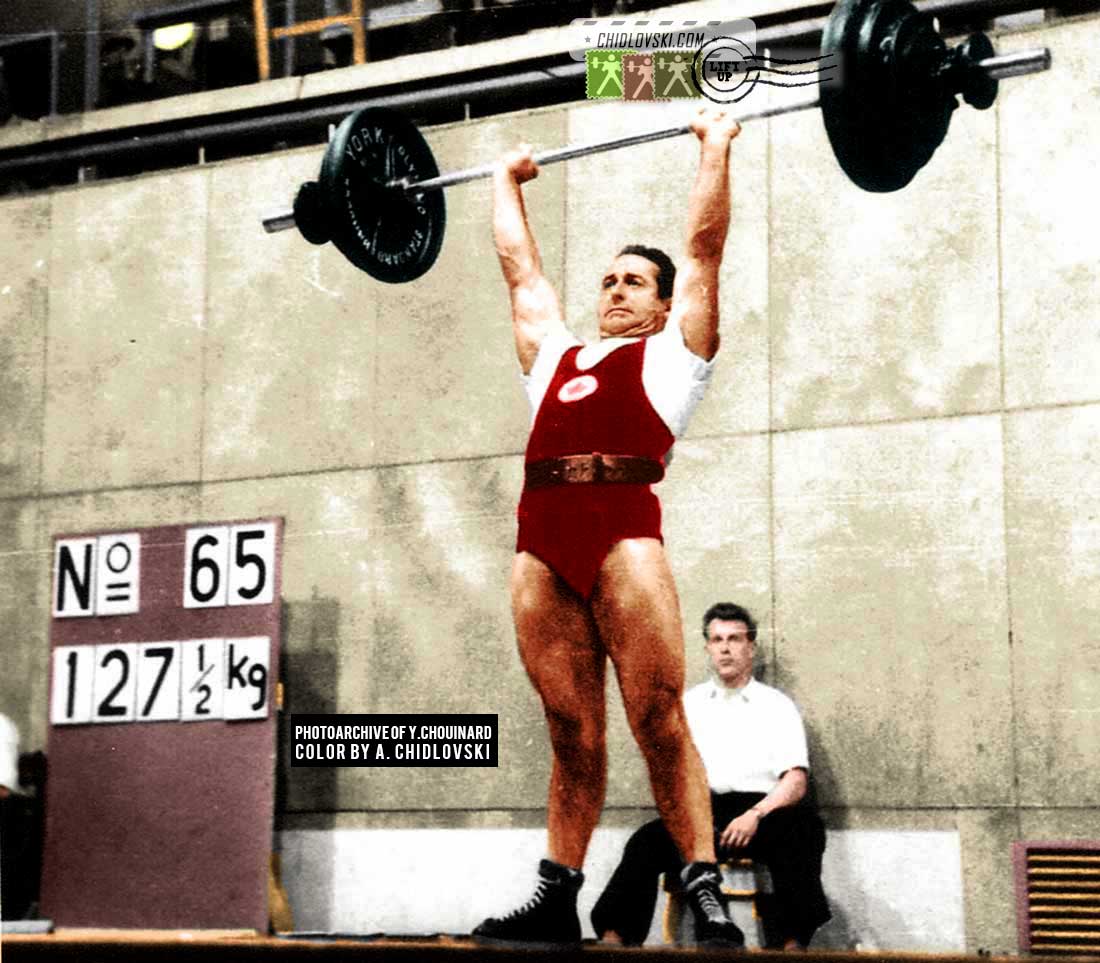 History in Color:
July 26, 1952, Helsinki, Finland –Middleweight Gerry Gratton of Canada goes for the world record in the press lift in the 75kg weight class of the weightlifting tournament at the 1952 Summer Olympics in Helsinki.

Gerry was the 1st in the press competition and became a vice champion of the 1952 Olympics after the end of the tournament in the middleweight class.

He represented Canada at two Summer Olympics – in addition to the silver medal in 1952, he won the 5th place at the Olympics in London in 1948.

His mini bio below was written by Yvon Chouinard (Canada). Who can be a better guest speaker on Gerry Gratton than a person who competed with him in the tournaments and then was the President of Canadian Weightlifting Federation. In addition to all of this, Yvon Chouinard authored perhaps the finest book on the history of Olympic weightlifting in Canada.

During the 1950s, Gérald Gratton’s many medals and records, both in Canada and on the British Commonwealth stage, are the result of great discipline combined with an impeccable sport ethic.

In 1948, at the age of 20, Gérald Gratton took part in the OLYMPIC GAMES of London. For the first time, Canadians were participating in the Olympic weightlifting tournament. Of the five Canadian weightlifters present, Gérald Gratton posted the best result with a fifth place.

On the day after the closing ceremony of the Olympic Games, the Canadian strongman participated in the British Empire’s weightlifting championships at the Scala Theater in London. Gratton distinguished himself by climbing on the highest step of the podium in the middleweight category.

A few years later, in 1950, he won the gold medal at the British Empire Games in Auckland, New Zealand.

Then, in 1952, at the Olympic Games in Helsinki, he equalized the world record for the PRESS in the middleweight category (75 kg). His brilliant performance give him the first position. But after his lift, an American official lodged a protest, claiming that the Canadian would have bent too much during a lift. Other officials agreed and the Canadian weightlifter had to settle for the silver medal. The following days the film of he competition was reviewed, it became evident it was a good lift and should not having refused. But it was too late.

In Vancouver in 1954, he remained an important part of the Canadian team at the Empire Games. The Verdunois was then designated to carry the flag during the opening ceremonies. During the weightlifting tournament, in the light heavyweight category (82.5 kg), he decreed his closest rival by lifting a total of more than 36 kilos.
Two years later, he is part of the Canadian team that goes to the Melbourne Olympics. A few days before the start of the weightlifting tournament, many already see him on the Olympic podium. The athlete who is at his third Olympic Games then displays an overweight of two kilos. During the official weigh-in, the Canadian team is faced with a real calamity: Gérald Gratton is disqualified from the Olympic

tournament for being overweight of one hundred grams!
After this heartbreaking event, Gratton participated in these COMMONWEALTH GAMES in 1958. He retired from competition in the late 1950s.

In June 1963, he suffered serious injuries in a car accident. He will die a few days later at the age of 35.

In 1955, the Canadian Olympic Hall of Fame recognized its achievements by opening its doors in its first year of existence. Despite this, Gérald Gratton remains one of the most forgotten of our Canadian sporting heritage.