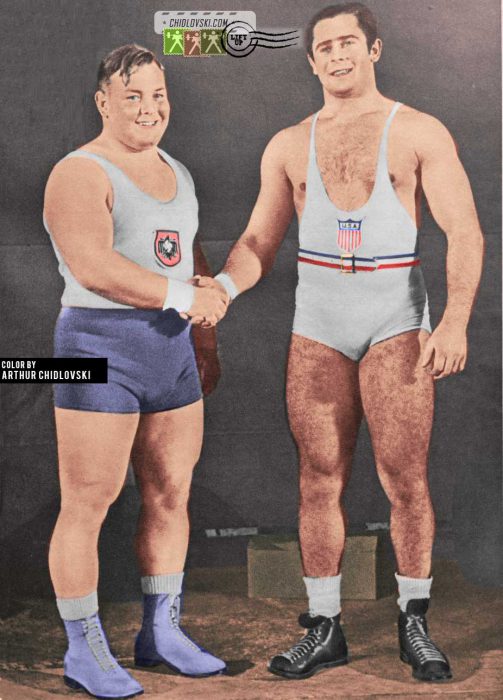 October 23, 1938, Vienna, Austria – Joseph Manger of Germany wins a gold medal in the 82.5+kg weight class and Steve Stanko of Team USA becomes a silver medalist at the 1938 World Championships in Vienna.

This was the last World championship before the beginning of the WWII. The black and white original came from an Austrian newspaper of the time. Besides a story on the weightlifting contest, the paper was filled with militaristic and Nazi photos. The war was in the air…

The 1938 World Championships brought together 46 athletes from 17 countries. Germany won the 1st place. USA was 2nd and Italy 3rd.

The U.S. weightlifting is trying to become an elite weightlifting power on the international arena. Team USA had 2 world champions in 1938 – world superstar in the featherweight Tony Terlazzo and young promising John Davis in the 82.5kg. John Terpak won a bronze medal in the 75kg. Steve Stanko became a vice champion in 82.5+kg category.

German heavyweight and Olympic champion of the 1936 Games in Berlin, Joseph Manger seemed unbeatable at the time. He defeated Stanko on several occasions prior to the 1938 World Championships in Vienna.