Tony Terlazzo On His Way For an Olympic Medal 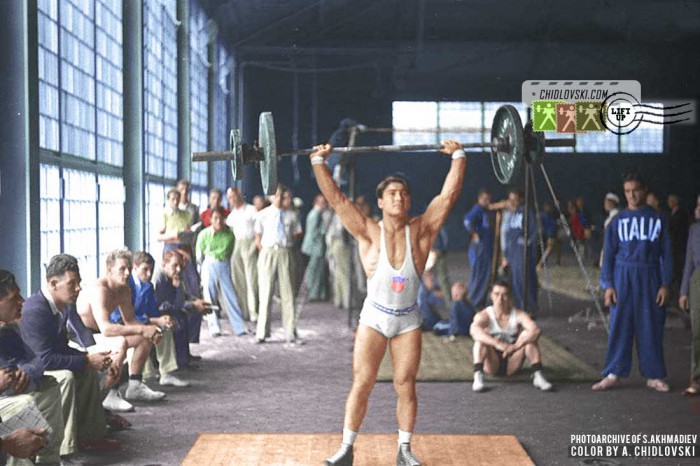 History in Color:
Legendary Tony Terlazzo of York Barbell is preparing to battle for his first Olympic medal at the 1932 Summer Olympics in July 1932 in Los Angeles, USA.

He was a graduate of the York Barbell Club of Bob Hoffman.

Known as the York Oil Burner Athletic Club, Hoffman’s weightlifting venture consisted mostly of Pennsylvania Dutch (Walter and Harry Good, Art Levan, Joe Miller, Dick Batchell and more) and the Sicilians from Italy (Tony Terlazzo, Joe and Anthony  Fiorito, Gus Modica, Angelo Taormine and others).  The club became a true representation of the American melting pot concept with the addition of such Eastern European athletes as Lithuanian Wally Zagurski, Ukrainian John Terpak, Czech John Grimek, Hungarian Steve Stanko… Employed by Bob Hoffman, they all worked at his oil burner plant for a $10-per-week pay and trained in the weightlifting gym.

Team USA and Bob Hoffman’s gang was still on its way to become a true leader in Olympic weightlifting when Tony Terlazzo became one of the most talented and strongest featherweights in the world.

In 1937 and 1938, Terlazzo won the World Championships hosted in Paris and Vienna.

In 1944, American Numero Uno left York, PA for Los Angeles when he owned and ran his own gym for years.

Like many weightlifters from York, Terlazzo also was an avid bodybuilder featured on the Strength and Health covers. In 1939, he won the Mr. America (AAU) title.