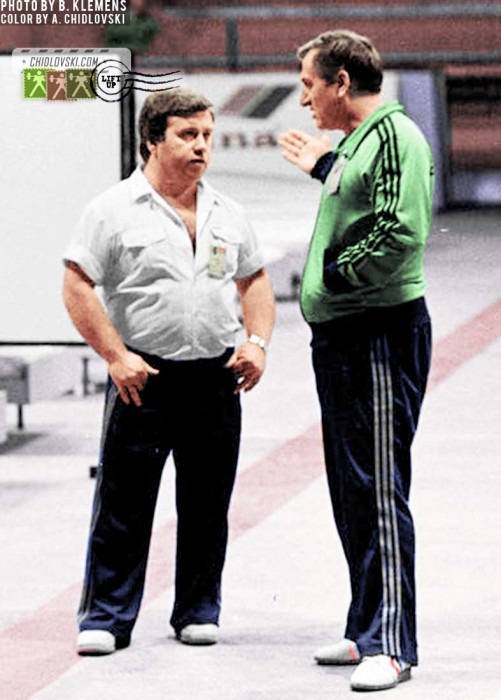 Obviously, the Soviet and Bulgarian weightlifting teams were main medal winners at the top international tournaments at the time. It was a big weightlifting rivalry that produced unforgettable battles between athletes and outstanding world records set on the competition platforms.

On the other hand, it was not an open weightlifting rivalry with long discussions on the front covers of the papers and TV news. Both Bulgaria and the Soviet Union were part of the same political bloc, the East European bloc and rivalries were much more subtle and delicate than USA vs. USSR in Olympic weightlifting in the the 1950s. Brothers are not supposed to argue. It’s not that easy to go against Big Brother even you seem to outgrow him.

Last but not least, Abadzhiev authored the so-called “Bulgarian System” of training that revolutionized and streamlined the training process back in the early 1970s.

Historically, Alexander Prilepin was the third Russian coach that Ivan Abadzhiev faced as the head coach of Bulgarian weightlifting team.

Alexander Prilepin was a head coach of the junior Team USSR from 1975 to 1980. Then he got promoted to be a head coach of Team USSR and made a definite impact changing the training methods in the Soviet weightlifting.

His predecessors for the most part were distinguished champions. Yakov Kutsenko, Arkady Vorobyev, Alexey Medvedev were milestone lifters in the history of Soviet weighlifting and they smoothly transitioned to the coaching and administrative authority with the national team.

Unlike them, Prilepin’s contribution was mostly in sports sciences and applied theory of sports. In fact, it was Prilepin who recognized the improvement of Bulgarian weightlifting methods, studied them and authored “bulgarization” of a good old rock-solid Soviet training methodology. He also didn’t neglect to emphasize the pharmacological aspect in supporting such high intensity training.

Alexander Prilepin earned a PhD and developed interesting studies. In practical matters, he applied them in training the juniors of the Team USSR and preparing the new generation of athletes.

Less than a year before his death, Soviet supers, Anatoly Pisarenko and Alexander Kurlovich were detained by custom authorities in the airport in Montreal when they tried to smuggle anabolics into Canada in the fall of 1984. Both Pisarenko and Kurlovich were stripped off all their titles and priviliges in the Soviet Union.

As for Prilepin, the Soviet sports authorities picked him as a scapegoat for the this shameful episode in Canada. The reputation of Soviet athletes was damaged. Prilepin was found responsible and was fired from coaching the national team.

Those were harsh accusations and career ending actions.

Alexander Prilepin suffered a heart attack and died on June 25, 1985.

Prilepin definitely deserves much more recognition for his role in the history of Soviet weightlifting.

The Soviet sports management seldom accepted mistakes and almost never overruled their previous decisions. This certainly explains controversy related to Alexander Prilepin and lack appreciation of his contrubution in the history books.

Just a few thoughts while looking at the cover photo of casual conversation between two famous weightlifting coaches of the past.