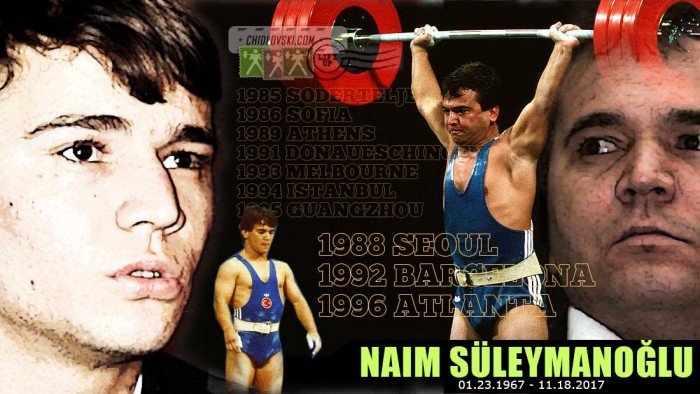 3-time Olympic champion and 7-time world champion Naim Süleymanoğlu has died at the age of 50 at the Ataşehir Memorial Hospital in Istanbul, Turkey.

Due to liver failure caused by cirrhosis, Naim Süleymanoğlu had a liver transplant surgery on October 5, 2017. He remained in the hospital following  following a brain hemorrhage and underwent further surgery on Nov. 11.

Naim Süleymanoğlu was a true legend and, by many accounts, the best Olympic weightlifter ever to step on the competition platform. He was the first weightlifter in the history to win 3 Summer Olympics. He won gold medals in 1988, 1992 and 1996.

The media nicknamed him the “Pocket Hercules” for his short stature. Standing 4 feet 10 inches tall and with a bodyweight of 135 pounds, the Naim was able to lift three times his weight.

Naim Süleymanoğlu was born as Naim Shalamanov in 1967 in an ethnic Turkish family in Bulgaria, and defected to Turkey while training in Australia in 1986 ..

From a very early age, Naim showed that he was a very promising athlete.

At 15, he set his first world record. At 16, he became a vice champion of the world.

At 17, he was considered a true candidate to win the Olympics Gold. However, due to the boycott of the 1984 Olympics in Los Angeles, he didn’t compete in the Olympics but won the Friendship Cup for the weightllifting teams that didn’t go to Los Angeles.

On behalf of weightlifting community and the Lift Up project, we would like to extend our condolences to Naim Süleymanoğlu’s family and friends.

It’s a big loss for all.