The 2017 IWF World Championships tournament is scheduled to be held in Anaheim, USA from November 27, 2017 to  December 5, 2017. The Lift Up and our sub-publications continue the Go USA Weightlifting Marathon superseries of historical articles to cheer up the Team USA and all the fans of the Iron Game who certainly will be following one of the key Olympic weightlifting events of the year.

One of the last group photos of Team USA 1958 made in York, PA prior to taking off for the World Championship in Stockholm, Sweden:

For those who don’t know, Bob Hoffman for decades sponsored the U.S. weightlifting from his own pocket. Athletes lived in the bungalow of his hilltop estate and trained in his facilities in York.

Of course, financially one American millionaire couldn’t really compete with the rising Soviet sports powerhouse. After all when the USSR collapsed in 1991, it left hundreds millionaires and dozens of billionaires. What chance did Bob Hoffman actually have to compete against the Big Red Machine?

But, back in 1958, hopes and expectations were still high. American weightlifting continued its battles against the rising weightlifting power.

The photo depicts six U.S. athletes from Team USA 1958 and all six came back home from Stockholm with medals.

In the featherweight, Isaac Berger won the first place with a 10KG lead over silver medalist Eugene Minaev of Russia.

Jim George won silver medal in the 82.5 KG class behind Siberian strong man Trofim Lomakin. He managed to beat Lomakin in the snatch and cj’d 170KG – same as Trofim. But 10KG lead in the press lift gave Lomakin the gold.

Middle heavyweight Dave Sheppard won silver medal in the 90KG class with Arkady Vorovyev being crowned as No. 1 in the world.

In the 90KG+ category, Alexey Medvedev won the title and Dave Ashman won the silver medal. Needless to say, Ashman was the first man in the world to clean and jerk 200KG. He had world class lifts in the snatch and cj but lacked strength in the press lift. In Stockholm, he was only 5th in the press and then managed to win the second place in total due to outstanding results in his dynamic lifts. 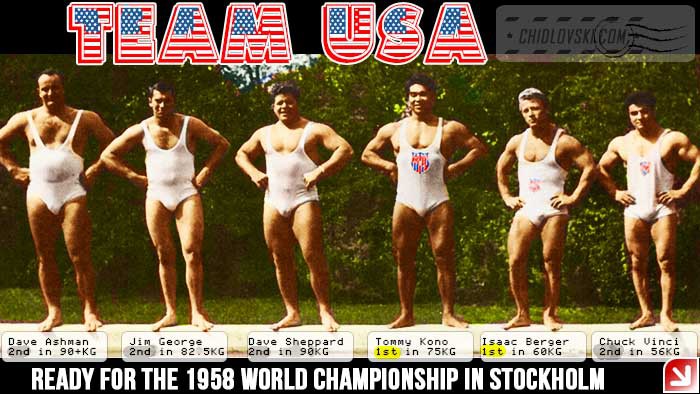