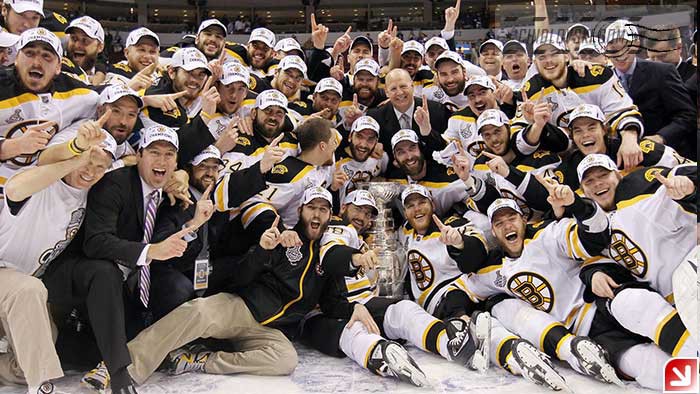 The seasons are getting longer. The teams are getting bigger. The joy of winning the championship has no limits.

The cover photo was made in Vancouver after Game 7 of the 2010-11 playoff finals. All players and personnel of the Bruins organization wear one jersey number. That is Number ONE!

The just won the Stanley Cup!

The Bruins began the 2010-11 Season with a solid record of 6-2-0 in October and a mediocre 6-6-2 record in November. Then the team bounced back to have a strong performance in December and finished the calendar year with a record of 20-11-5. The Bruins went on with a record of 8-4-2 in January.

On January 22nd, the Bruins won 6-2 in Colorado but their key player Marc Savard suffered another concussion and had to miss the rest of the season. In order to replace Savard, in mid February, the Bruins acquired Chris Kelly from the Ottawa Senators and Tomas Kaberle from the Toronto Maple Leafs. The trades seemed to work and the  team finished had a seven game winning streak.

On March 8th, the Bruins played in Montreal and Max Pacioretty of Canadiens suffered head and neck injuries, after was he was checked into the glass by Zdeno Chara. The NHL didn’t  suspend Chara but it was a controversial moment of the season.

The rivalry between the Bruins and Canadiens reached its new peak when after the Chara vs Pacioretty episode, Boston and Montreal played in the first round of the Stanley Cup Playoffs. The seriesended in a seventh game at TD Garden when in overtime Nathan Horton scored at 5:43 and send the Bruins on to the second round where the Bruins swept Philadelphia in 4 games.

In the Eastern Conference Finals, the Bruins faced the Tampa Bay Lightning and again had to play Game 7 in Boston. The goalies kept the 0-0 score for two periods. In the third period, with 7:33 left Nathan Horton would put the Bruins on the board. Tim Thomas stopped 24 shots to give the Bruins 1-0 win that sent them to the Stanley Cup Finals for the first time in 21 years.

In the finals the Bruins played vs Vancouver Canucks. In the clash between two distinct hockey styles, the series had to be decided in Game 7 again. This time Bruins had to play it in Vancouver. The Bruins scored first with  a goal by Patrice Bergeron. Tim Thomas continued to be a frustrating factor for the Canucka by keeping them scoreless.  Brad Marchand and Patrice Bergeron made the score 3-0. In the end Marchand scored an empty net goal ands the Bruins won the Stanley Cup with a 4-0 victory.

Tim Thomas was had a clutch performance in the playoffs received the Conn Smythe trophy as Playoff MVP.