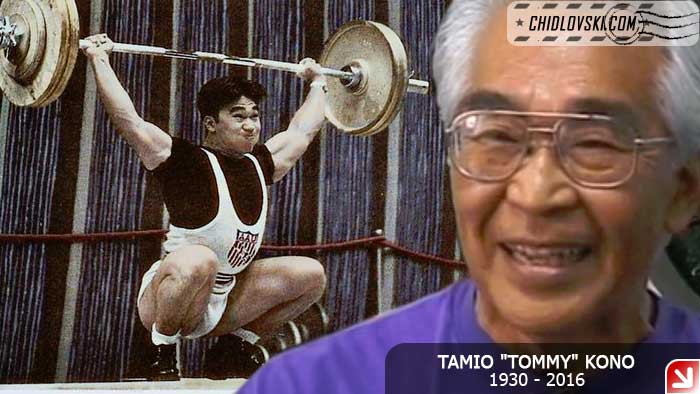 Tommy Kono needs no special introduction for those who follow the Iron Game and the Olympics. He won gold medals for Team USA at the Summer Olympics in Helsinki’1952 and Melbourne’56. In 1960, Kono won his third Olympic medal for the second place in Rome. Tommy Kono won gold at six World championships and three Pan American Games. He authored 21 world records on the Olympic weightlifting platform.

In addition to his weightlifting titles, Tommy Kono had an outstanding physique and was able to win three Mr. Universe titles in bodybuilding.

After retiring from competition, Kono became a successful lifting coach, training the Mexican national teams from 1966 – 1969 and then coaching the West German national teams from 1969 through 1972. He also coached the first three U.S. women’s weight-lifting teams. He led the women to a second-place finish in the first world championship in 1987, and two more runner-up finishes in subsequent world championships.

Kono was a phenomenal competitor. He was known for his phenomenal lifting technique and determination to win. “When Kono looks at me from the wings,” the Soviet lifter Fedor Bogdanovsky once said, “it works on me like a python on a rabbit.”

There are many great stories about Tommy Kono. For more information on the legend, his career stats, photos and film footage, please visit Tommy Kono @ Lift Up.

It’s very sad to hear that he is no longer with us. According to his family, he passed away from complications of liver cirrhosis on April 24, 2016 in Honolulu, HI.

He will be in our memories.