Peter George (USA): What to Do in Munich During the Octoberfest 1955? 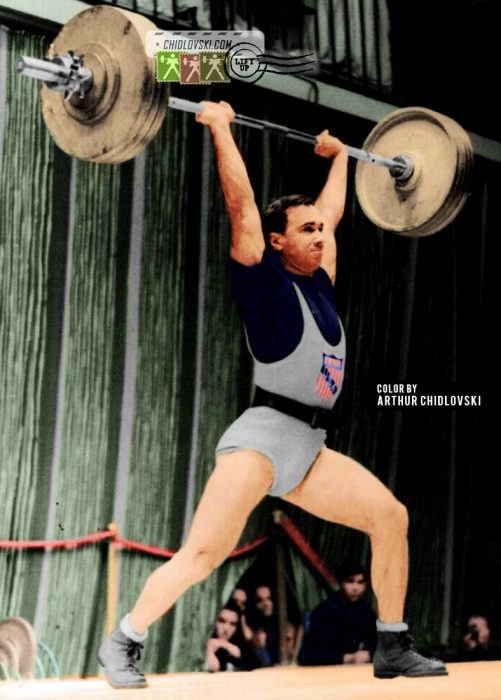 History in Color:
October 14, 1955, Munich, Germany – Olympic champion Peter George of Acron, Ohio, USA is on his way to win a gold medal in the 75kg weight class at the 1955 World Championships in Munich.

What to do in Munich, Bavaria, Germany during the Octoberfest?

The obvious answer is to drink beer, right? Wrong!

As shown on the cover photo, Olympic champion Peter George offered an alternative way to celebrate the world famous Octoberfest in 1955. He won the World title in Olympic weightlifting!

After the press lift, George was behind Fedor Bogdanovsky of the Soviet team by 7.5kg. Olympic press lift wasn’t the strongest lift of Peter George. He was a very fast technician and usually managed to reach the top poundage in total after the snatch and clean-and-jerk lifts. He followed this scenario in Munich too.

In the second lift, George out snatched the Soviet middleweight by 5kg. Finally, in the clean-and-jerk part, Bogdanovsky finished with a 155kg lift and 405 kg in total.

Peter George jerked 157.5kg. He also reached a 405kg total and the 1955 World title went to Peter George because of a lighter bodyweight.