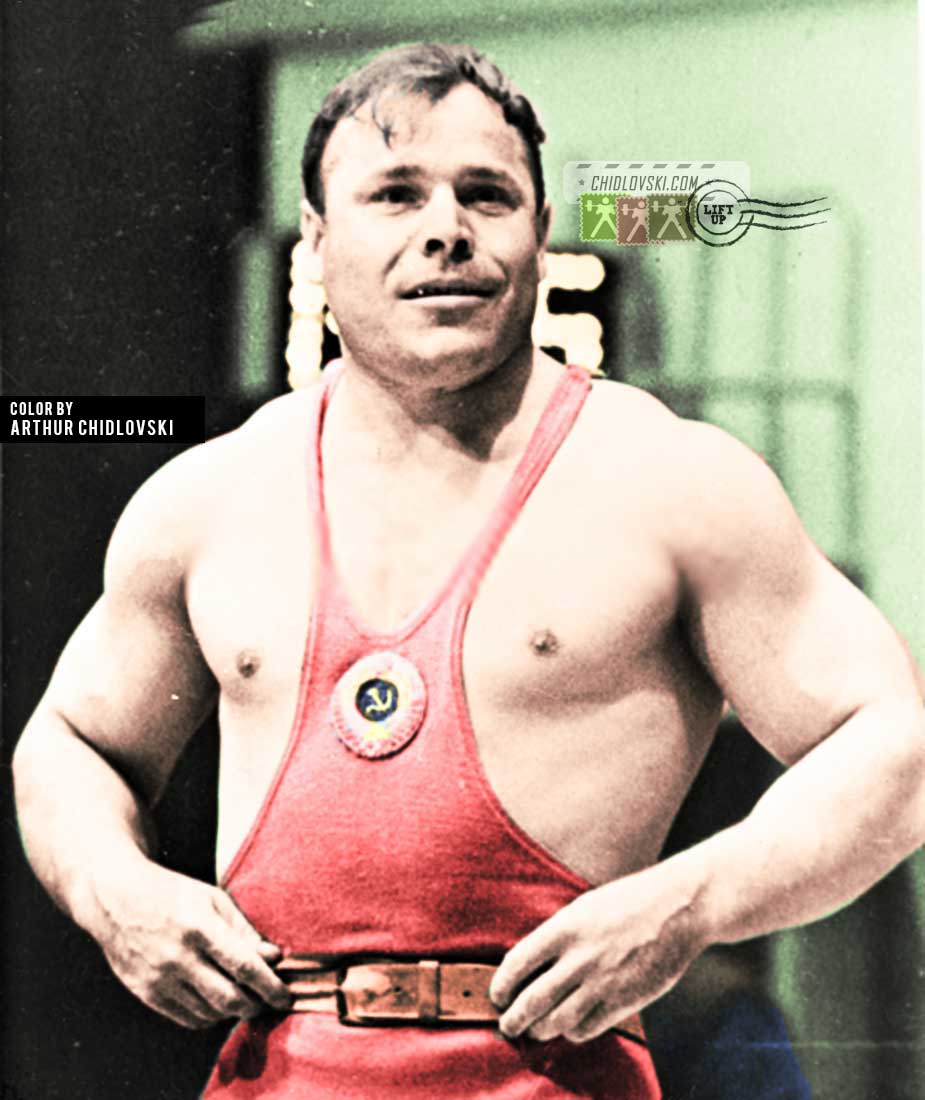 We had several articles telling his story and writing about all his medals, titles, awards.

About his glory and… demons.

On the cover photo, Trifim Lomakin is 36 and this is the late period of his career.

In the last few years, cinematographers in Russia made two or tree “based-on-the-true-story” films about legendary Soviet athletes. One might argue about the accuracy of the films but I did enjoy watching films about legendary hockey player Valery Kharlamov and the 1972 Team USSR basketball that won the Olympics in Munich. If there are any thoughts on making a movie about Soviet weightlifters, Trofim Lomakin is a must character in there.

It doesn’t matter if the film is a drama or comedy. Lomakin fits all genres.

He was a fame and a shame of this sport.

At the first Summer Olympics with Team USSR in Helsinki (1952), Lomakin won a gold Olympic medal and was selected to carry the Soviet flag at the closing ceremony. Such honor had never be given to anybody but to the most glorious champions. To the ones to be proud of.

At the same time, there are numerous references in media about the bad behavior and “little weaknesses” of Lomakin.

His teammate and a hotel roommate on many trips to the national and international meets, Arkady Vorobyev publicly said that that Trofim lived a double life for years.

In the daytime, he trained with the Red Army club and Team USSR. At night, he was drinking. One of the strogest athletes in the world simply was weak on resisting the drinking habits.

In 1956, Lomakin didn’t make it to the Team USSR going to the 1956 Summer Olympics in Mebourne. However, four years later he was selected to the national team at the 1960 Summer Olympis in Rome and won a silver medal.

How he managed to be an alcoholic addict and remain on the top of the game in weightlifting for a decade remains a mystery for me.

Well-known TV host Vladimir Pozner remembers that Lomakin was his neighbor in the apartment house. Every night Pozner listened how behind the wall drunk Trofim was beating his wife. In the end, Pozner called the police.

Life of Lomakin ended tragically too – he fell down from the wall of the horse racing arena in Moscow or, perhaps, was pushed by someone when he was 49. To this day, it remains a mystery whether it was an accident or a murder.

Just some memories about the “bad boy” of the Soviet weightlifting. Some thinking out loud about the fame and shame of the big champion from the past.