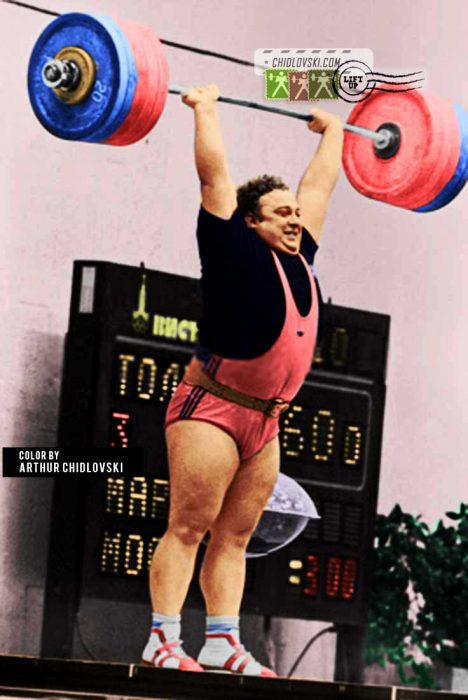 One of the frequently asked questions about Olympic weightlifting sound like who was the first to lift 200kg.

Most don’t ask about 270kg. So far nobody cleaned-and-jerked 270kg in the official competitions.

Then, how about 260kg? Our History in Color photo covers the historical moment when Vladimir Marchuk of Burevestnik club in Moscow set the new world record (260kg) in clean-and-jerk at the 1982 USSR Cup on December 19, 1982 in Moscow.

It was Marchuk’s third attempt and it brought him the world record, gold medal of the USSR championship (clean-and-jerk) and the overall win of the 1982 USSR Cup in the super heavyweight.

We already wrote about Marchuk’s phenomenal squats and huge break-in to the elite Olympic weightlifting literally within 1,5-2 years.

Prior to 1979, only a few local experts knew about Vladimir Marchuk. In 1979, he won the bronze in the super heavyweight with 397.5kg in total at the USSR Spartakiade in Leningrad.

Impressive total of 450kg (190+260) was the official personal best of Vladimir Marchuk, one the most memorable world super heavyweight of the late 1970s – early 1980s.