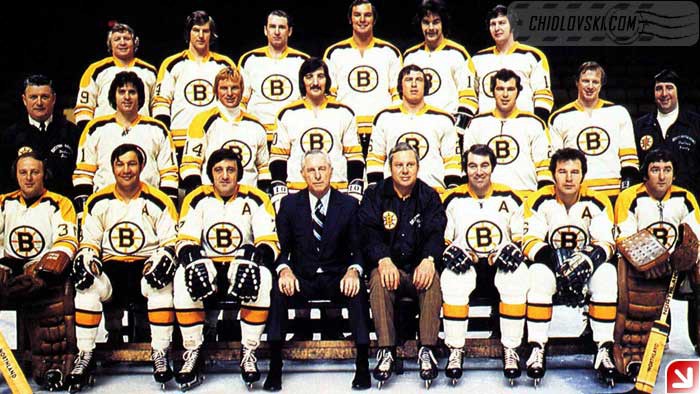 Boston Bruins 1971-72 is one of my all-time favorite teams. This team is a perfect match of purely Boston Bruins team spirit and presence of really high caliber players on the roster. Like in the previous season, the Bruins dominated the League in the regular season and finished 1st with 119 points. Bobby Orr wins his 5th consecutive Norris Trophy and 3rd Hart Trophy. Phil Espostito wins the Art Ross Trophy. He leads the NHL in points (133) and goals (66).

In the playoffs,  the Bruins outplayed the Toronto Maple Leafs in five games in the quaterfinals and swept the St. Louis Blues in four straight games in the semifinals. In the Stanley Cup finals,   the Bruins faced the New York Rangers that managed to knock off the Canadiens and Penguins on their way to the finals.

The Bruins  won their second Stanley Cup in three years by beating the New York Rangers in six games.

Gerry Cheevers was spectacular and earned a reputation of the greatest clutch goalie of the time. Bobby Orr received the Conn Smythe Award.