What Happens In Russia Stays In Russia: Power Play 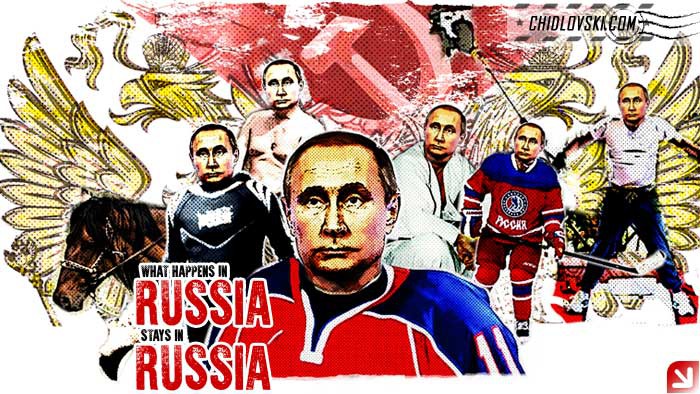 Putin is Russia.
No Putin. No Russia.
V. Volodin, Chief of Staff of
Russian President

The quote by the ex-chief of stuff of Putin’s administration definitely made Russian President happy.

Obviously, one can argue for or against the authoritarian style of running Mother Russia.

There are many supporters of these methods and many opponents of those.

The Sportsiest President of All Times

One thing we can’t deny is that Vladimir Putin is the most all time physically fit ruler of Russia. He the sportsiest of them all.

Never mind that he would be 1 hour late for a meeting with U.S. Vice President Biden because he was on target – to finish his scheduled noon lapses in the swimming pool.

That’s between Putin and Biden.

We are not about politics. We are about 6-pack abs and muscles and appearance and sports spirit of Russian leaders in the last 100 years or so.

Back In the USSR

Most of them cared less about sports.

Joseph Stalin was frequently called the best friend of Soviet skiers, weightlifters, jumpers, boxers, runners, swimmers, chess players… You name it. He was too busy exterminating his enemies to spend some time on the ice rink or volleyball court. However, he was the one to realise that the sports is a great propaganda tool and that the winning at the competition against Russian political opponents should become mandatory for the Soviet athletes.

Leonid Brezhnev was a huge fan of hockey and the Red Army club in particular. We would leave big government meetings in Kremlin to get in time for the hockey game of the CSKA.

After the collapse of the USSR, the first President of Russia Boris Yeltsin showed himself as an avid tennis player.

Politicians from that era remember that playing tennis was a must for a significant post in the President Yeltsin’s administration.

From this prospective, it’s much harder to keep up with President Putin’s preferences. The initial choice was the judo, the sport Putin’s youth. His training partners very soon began to run multi-billion business corporations. They were super successful in sports and in business.

Recently, Russia was accused of state run doping system and fasle WADA test sampling during the 2014 Winter Olympics in Sochi.

Doping Is a Hot Issue today

Team Russia was on the brink of being banned from the 2016 Olympics in Rio.

In the eyes of many, it was Putin who personally supported Russian athletes and was able to convince the IOC not to make a mistake.

The IOC didn’t. They passed the buck of decision making to the individual sports federations.

With the exception of two federations, the rest of them agreed that it won’t be fair to ban Russia from going to Rio de Janeiro.

The interesting result of this recent Doping Gate and Russia being pictured as the main Dopingland in the world is that now President Putin took drug control in sports under personal control.

Lets see how the most athletic president of Russia of all times will score in this battle with the biggest evil in today’s sport.

He learned how to skate and shoot the puck in a week.

He was able to convince the IOC to hold the Winter Olympics in Russian sub tropics.

Perhaps, he will be lucky and persistent enough to beat the PEDs for a drug-free sports.

And then goes all around the world.