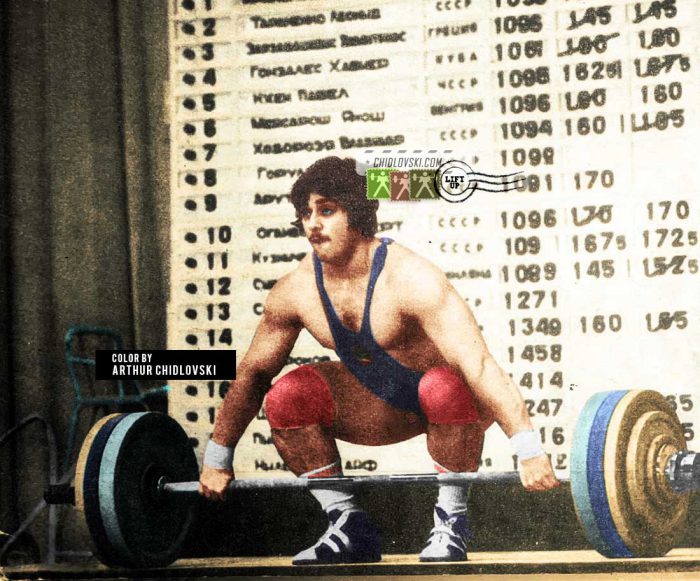 History in Color:
March 15, 1979, Leningrad, USSR –  21-year old heavyweight Sergey Arakelov competes for the Team USSR in the 110kg at the 1979 Friendship Cup at the Yubileiny Arena in Leningrad.

A graduate of Krasnodar Weightlifting School of that era, Arakelov established himself as one of the most promising junior athletes. At 19, Arakelov won a gold medal at the 1977 World Junior Championships with a 380kg (165+215) total in the 100kg class. He was invited by Igor Kydyukov, Tean USSR head coach, to train with and then to compete for the national team on the top international level.

In 1979, Arakelov won a silver at the USSR Spartakiade and USSR Championships in Leningrad and then became a World champion in the 110kg class in Saloniki, Greece. Unfortunately, Arakelov wasn’t able to compete at the 1980 Summer Olympics in Moscow because of the injury. After the Olympics, Sergey started another trip to the top level of this sport. He won bronze medals at the USSR Championships in 1981 and 1982 and won gold medals at the 1982 World and European Championships in Ljubljana, Yugoslavia. However, soon afterwards, he was injured again and that was the end of his remarkable pursuit of medals and titles in Olympic weightlifting.