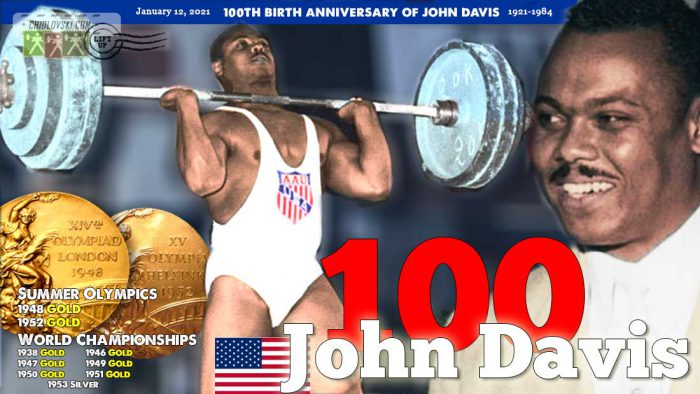 January 12, 2021 – A true legend of Olympic weightlifting, 2x Olympic Champion, 6x World Champion, author of many remarkable world records, U.S. heavyweight John Davis (1921-1984) would have been celebrating his 100th birthday on this day.

John Davis was born and grew up in the NYC area. In his childhood years he was good in gymnastics. After the end of a weightlifting career he worked for years as a correction officer at the famous Rikers Island jail facilities. Besides weightlifting, Davis had two big passions in his life. It was jazz and opera. He actually was a very good opera aria performer but couldn’t pursue this career due to a chronic medical defect (hiccups).

In 100 years since John Davis was born in 1921, there were so many changes in the sport of Olympic weightlifting – changes in the rules, elimination of the press lift, new lifting techniques and training methodologies, new outstanding champions, coaches and remarkable leaders in federations, new weight classes and new world records. There were fascinating ups and frustrating downs.

With all these said, the name of John Davis remains on the top as a symbol of a great athlete and personality, an unforgettable champion and a true legend.