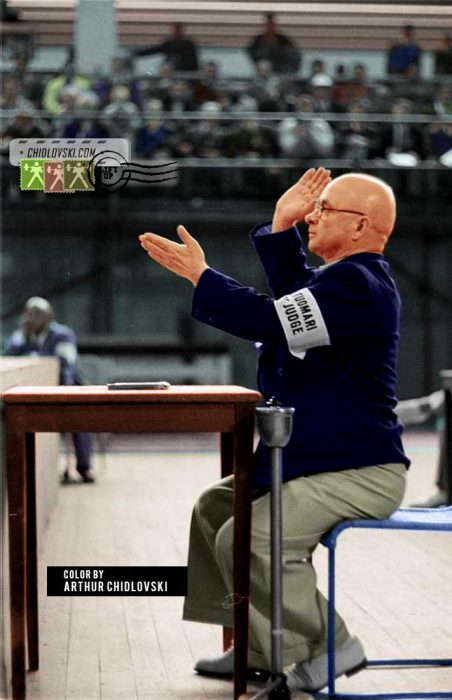 It was the first time ever when the Soviet official served as the Chief Referee in the weightlifting competitions at the Olympics. He was 60 years old.

Alexander Bukharov was not an accidental tourist in the history of Olympic weightlifting in Russia and the Soviet Union. Weightlifters called him “Uncle Sasha”.

On June 5, 1934 the first 22 Soviet athletes became the Merited Masters of Sports (ZMS). Bukharov was listed as number 15 in the list and the first Soviet Olympic weightlifter ever to receive this highest rank in the USSR. In many ways, it was the Soviet Hall of Fame, the way to be remembered forever.

Alexander Bukharov (1892-1952) competed for the Sanitaz and Dynamo clubs of Moscow. As a featherweight lifter, He won 2 Russian Championships, 7 USSR Championships and 25 Moscow Championships. He was one of the first Soviet weightlifter to bypass world records (1917) and set 24 national records from 1917 to 1933. For over 30 years he served and the director of weightlifting department in the national sports committee.

The cover photo features another “first ever event” in the biography of Alexander Bukharov when he became the first Chief Referee from the USSR to officiate at the weightlifting tournaments at the Olympics. It took place in Helsinki in 1952. He was 60 and, sadly, it was the last year of his life.

A few months after the Olympics in Finland, the life of Alexander “Uncle Sasha” Bukharov ended tragically when he was traveling on the train back to Moscow from Stalingrad where the Soviet weightlifters competed at the 1952 USSR Team Championships.

Many observers attribute the reason of the tragedy to the fact that, at the time of the Championships, world champion Grigory Novak had a few drinks and, after a heated argument, had a fist fight with the hotel security men who refused to let him in. The fight ended with some body damages made to the hotel personnel.

Novak was a favorite athlete of the nation. There was more – Novak was the favorite of Joseph Stalin himself. Unforunately, the story with the fight in the hotel in Stalingrad wasn’t resolved on the spot in a diplomatic way. It seemed to go further and that was was too much even for the famous champion.

As an official supervisor of the Olympic weightlifting in the country, Bukharov was personally responsible for Grigory Novak. He knew he would have had to explain the actions like that. In all probability, the story would have not ended for Bukharov being sent in a gulag. However, being  relieved from all his honors, titles and advantages of a high-end position in the USSR Sports Committee seemed to be a no brainer.

Alexander “Uncle Sasha” Bukharov had a heart attack and died on the train before it arrived at the Kazan Railway Station in Moscow.

As for legendary Grigory Novak, he was suspended from sports competitions and began performing in the circus act with his two sons.