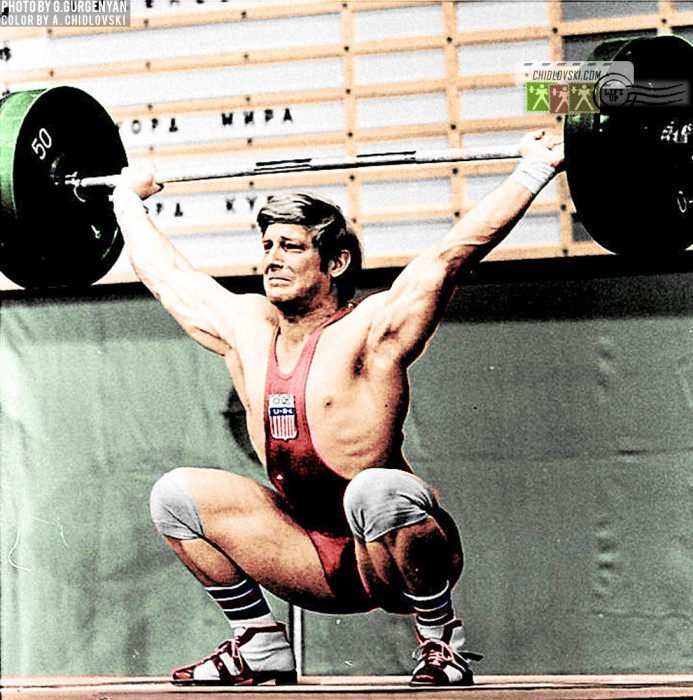 History in Color:
Legendary American weightlifter Lee James competes in the 90kg class at the 1978 Friendship Cup in Moscow, Russia.

It was one of the last appearances of Lee James of Team USA in the Olympic weightlifting tournaments.

In 1976, Lee James won a silver Olympic medal in Montreal. It was totally unexpected when he finished right behind legendary David Rigert of Team CCCP. It was unexpected and it was totally beautiful.

To me the story of Lee James is a story of American Weightlifting Cinderella Man.

Two years before the 1976 Summer Olympics, Lee James took the 4th place in the light heavyweight class at his first U.S. National Championship in 1974. Nothing looked promising in him at that time. His technique, a very important component of being an elite athlete, was rough. He looked more like a newbie than an Olympic hopeful.

The next year, Lee won a silver medal in the 82.5kg class at the 1975 Nationals. He made it to the national Team USA. He went on to win a gold medal at the 1975 Pan American Games in Mexico City and took the 13th place at the 1975 Worlds in Moscow.

In 1976, James Lee went though a weight class upgrade and moved up to the middle heavyweight category. With a clock ticking before the beginning of the 1976 Summer Olympics, it was a huge decision. James Lee won his first national title and was selected to represent the United States in Montreal.

We all know what happened there. James Lee brought home a beautiful, shinning and well-deserved silver medal. James’ heroics in 1976 became a true inspiration for generations of U.S. weightlifters to come.

At the 1978 Friendship Cup shown on the cover photo, James Lee finished on the 2nd place with the total of 355kg (155+200). Because of the injuries, he missed the whole year of 1977  and had an amazing comeback in 1978. He won the U.S. National Championship, set an American Record in the snatch but he was injured again preparing for the 1978 World Championship.