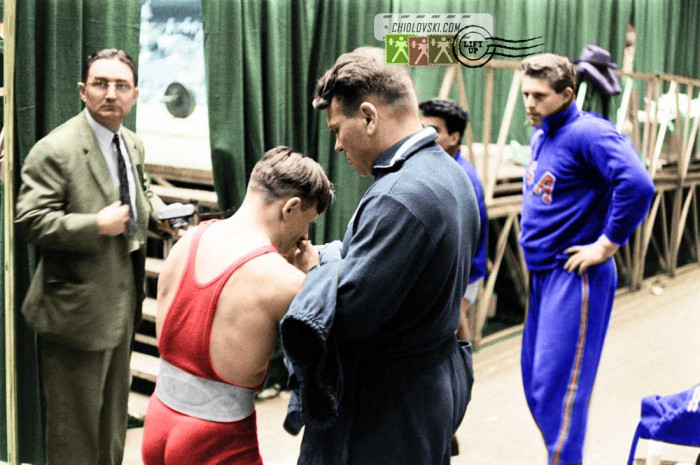 Cover photo:
May 12, 1958 – Team CCCP coach Alexander Bozhko assists Vladimir Stogov before his lift in the bantamweight competition of the 1958 USA vs. USSR match in Chicago. John Terpack, Chuck Vinci and Clyde Elmrich of Team USA are watching Stogov’s preparation.

Almost as soon as they landed in New York, the seven visiting Soviet strongmen began to wonder whether weight lifting in the U.S. is a sport or a sideshow. Dutifully they drank Cokes and made muscles for Manhattan photographers: dutifully they helped hoist “Miss Body Beautiful” aloft for enterprising Chicago newsmen. Light-Heavyweight Trofim Lomakin let one publicity man con him into posing on horseback until a comrade muttered: “Cossack!” Bantamweight Vladimir Stogov, an army chauffeur, took a turn behind the wheel of a new Ford, fled in terror when he pushed a button and the retractable hardtop began to fold. By the time the Russians got to their first match in Chicago’s International Amphitheater they should have been thoroughly bushed. But they were still more than a match for the seven U.S. strongmen who had been assembled by Bar-Bell Manufacturer Bob Hoffman.

Breath for Power. The U.S. team produced only one winner: Featherweight Isaac Berger. The little (5 ft. 2 in., 131 Ibs.) Israeli immigrant likes to think that the breath control he learned as a synagogue cantor has given him extra power. He hoisted a total of 804? lbs. for a new world record. The other U.S. squad members seemed so far from shape that the rest of the scheduled matches promised to be Russian pushovers. Bantamweight (class limit: 123Ѕ Ibs.) Charles Vinci, a squat Ohio steelworker who has been recently unemployed, had been forced to trade valuable training time for job hunting, and was worn out. Middle-Heavyweight (198Ѕ Ibs.) Dave Sheppard, the handsome health-food salesman who claims an unofficial world eating championship (five meals daily with snacks in between), was weak from dieting.

Strictly speaking, weight lifting is not a team sport. Each lifter must compete in three different styles of lifting,* with nothing but his own explosive energy to help him get the hefty bar bells aloft. But somehow, after their sad start, the U.S. strongmen developed a muscular team morale.

“Push, Man, Push!” Just three days later in Detroit, chunky “Chuck” Vinci, concentrating so hard that he managed a kind of self-hypnosis before each lift, beat Russia’s Vladimir Stogov with the help of a hefty 231ј lb. snatch. Dave Sheppard, heeding his teammates’ shouts to “Push, man, push!”, lifted a total of 1,013ѕ Ibs. for a second U.S. victory. The final score was Russia 4, the U.S. 3.

Against superior muscle, that was the best morale could do. In the final competition in Manhattan. Russia’s Heavyweight (more than 198Ѕ Ibs.) Alexei Medvedev, his big bay window leaking over his belt, posed pensively before the bar bells as if thought alone could lift them from the floor. Then he stopped thinking, started straining, and hefted a total of 1,080 Ibs. in three heaves, to lead his teammates to one more 4-3 victory. Said the Russians’ political chaperon as he accepted congratulations for his boys’ clean sweep: “I hope you have a new moon in orbit soon, too.”