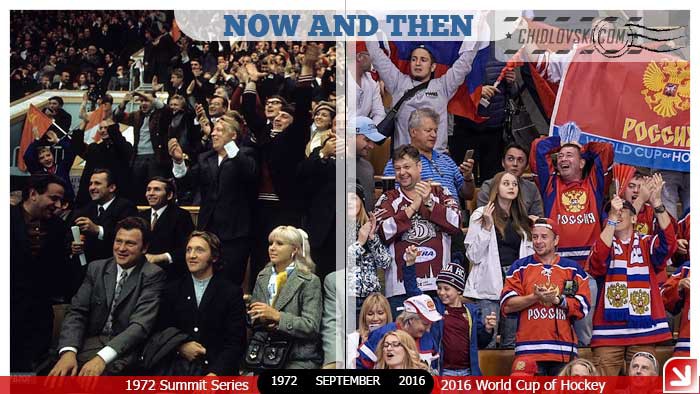 The outlook of Russian fans changed drastically since 1972.

To begin with, Russia went through huge changes in the last three decades. There is no more USSR. The country got exposed to commercialism and became more open to the world.

Russian fans today travel around the world to support their national hockey team. Back in the 1972, there were very few Russian fans cheering for their team in the first four games played in Montreal, Toronto, Winnipeg and Vancouver. Those were mostly professionals being in Canada on a business occasion.

Russian fans in Luzhniki consisted mostly of the VIP audience. The interest to the series was huge. Tickets never made to the regular ticket sales places but distributed directly to the Soviet elite.

If you look at the photos of the Soviet spectators in Moscow in 1972, you’ll see a lot of Soviet police officers and the majority of people following the dress code of the Bolshoy Theater rather than some sports event.

The average Soviet fans watched the 1972 Summit Series on TV. A few went to the Luzhniki Arena and were lucky enough to exchange badges and other sports memorabilia with the Team Canada members.

Today, Russian sports fans crowd is much more colorful and diverse. Hockey fans wear national team jerseys, hats and scarfs. They bring hockey banners and various Team Russia attributes available in the souvenir shops. They are more opened and cheerful for their team.

It’s a big difference between the look of the Soviet fans in 1972 and the Team Russia fans today.