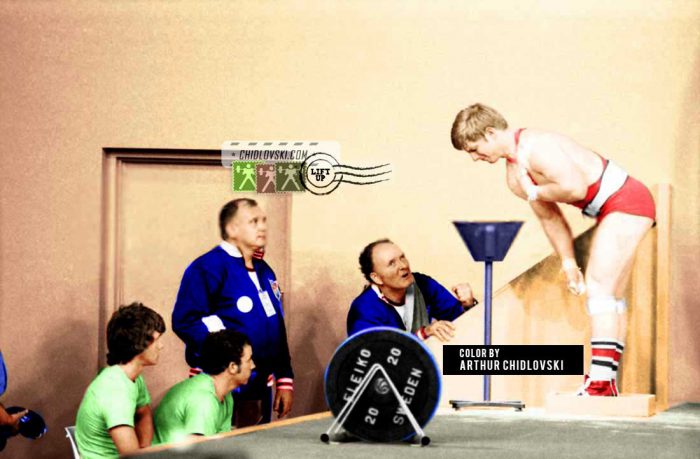 History in Color:
July 25, 1976, Montreal, Canada – American coaches Karl Faeth and Dick “Smitty” Smith are preparing a 22-year old middle heavyweight Lee James of Team USA for his lifting attempt during the competition in the 90kg class at the 1976 Summer Olympics in Montreal.

When Lee James won a silver Olympic medal in Montreal, it was a sensation. It was totally unexpected when he finished right behind legendary David Rigert of Team CCCP. It was unexpected and it was totally beautiful.

To me the story of Lee James is a story of American Weightlifting Cinderella Man and the story of Dick Smitty and Lee James trip to the top of the world is one of the most inspiring stories on the coach-n-athlete magic chemistry in the U.S. weightlifting history.

Dick “Smitty” Smith (1925-2014) played a significant role in the Olympic weightlifting history in the United States. For over 50 years he was employed by the York Barbell Corporation, known for decades as the centerpiece of American weightlifting. He was involved in training for big win in the World and Olympic tournaments such legendary U.S. weightlifters as Bill March, Bob Bednarski, Joe Dube, Garry Gubner, Lee James and many more. As a coach and a manager for the Team USA Weightlifting, Smitty was a 6x U.S. Olympian and attended 6 Summer Olympics.