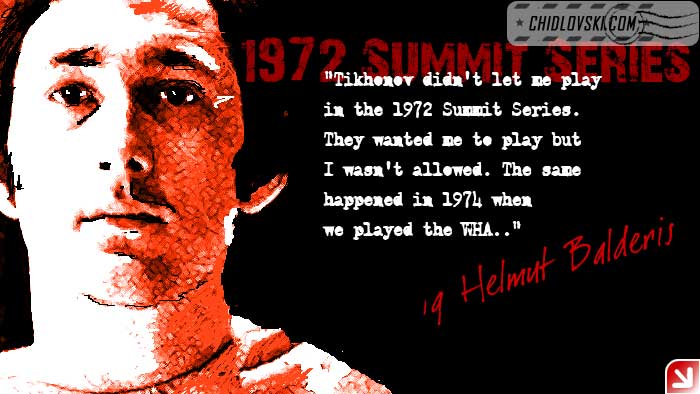 To be honest with you, I found this quote by Helmut Balderis interesting and rather surprising. In my hockey book, Balderis was the best hockey player of all times and nations. In my view, Balderis was a Guy “The Flower” Lafleur of Soviet hockey. Was he ready for a prime time to face Team Canada of the NHL caliber in September 1972?

He was only 20 and had no experience in elite adult hockey. His hometown team of Dynamo Riga was on its sensational trip up from minor leagues to the USSR Premier League and reached it in 1973.

Meanwhile, national team scouts selected Balderis to play for Team USSR at the 1971 Junior European Championships in Czechoslovakia. He won the gold medal and was one of the best on the ice. In fact, Balderis teammates on the tournament, goalie Vladislav Tretyak (#20) and center Alexander Volchkov (#30) played in the 1972 Summit Series. Yury Lebedev, Vyacheslav Anisin and Alexander Bodunov were 1 year older but became known as “Kids Line” in Canada for their play in the Summit. In addition, the newly appointed head coach Vsevolod Bobrov had a special eye on scoring talent, just like the one he had in his playing days. Most definitely, Bobrov recognized a huge potential in Balderis

Anyway, just some thoughts and memories at the time of the celebration of the 50th Anniversary of the 1972 Summit Series.