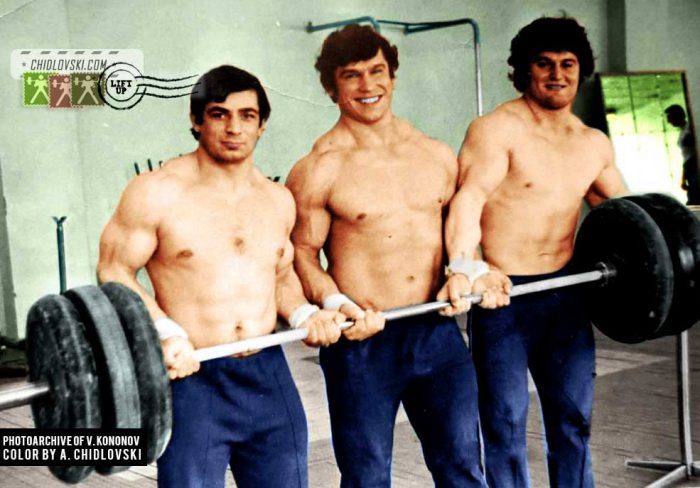 The History in Color series featured several group photos of the Soviet Olympic weightlifters in the training camps of the national Team USSR. This time, we present a cover photo of three strong prospects to the Olympic team in the training camp in Podolsk in 1976 (left to right):

All three were strong candidates to the national team. All three were memorable characters in the history of Soviet weightlifting.

Vadim Avzhyan (born in 1949) was a solid light heavyweight. His top performance years were in 1976-1979 when he competed for the Army clubs in Arkhangelsk, Russia and Dnepropetrovsk, Ukraine.

Vladimir Kononov (born in 1951) of Samara, Russia was an outstanding sub heavyweight athlete of the 1970s.

Being an impressive technician and a powerful lifter, Kononov managed to set 5 world records in his career and stood high in the top listings in the 100kg weight class for numerous years. He won the USSR Cup (1976) and was a USSR vice champion in 1976.