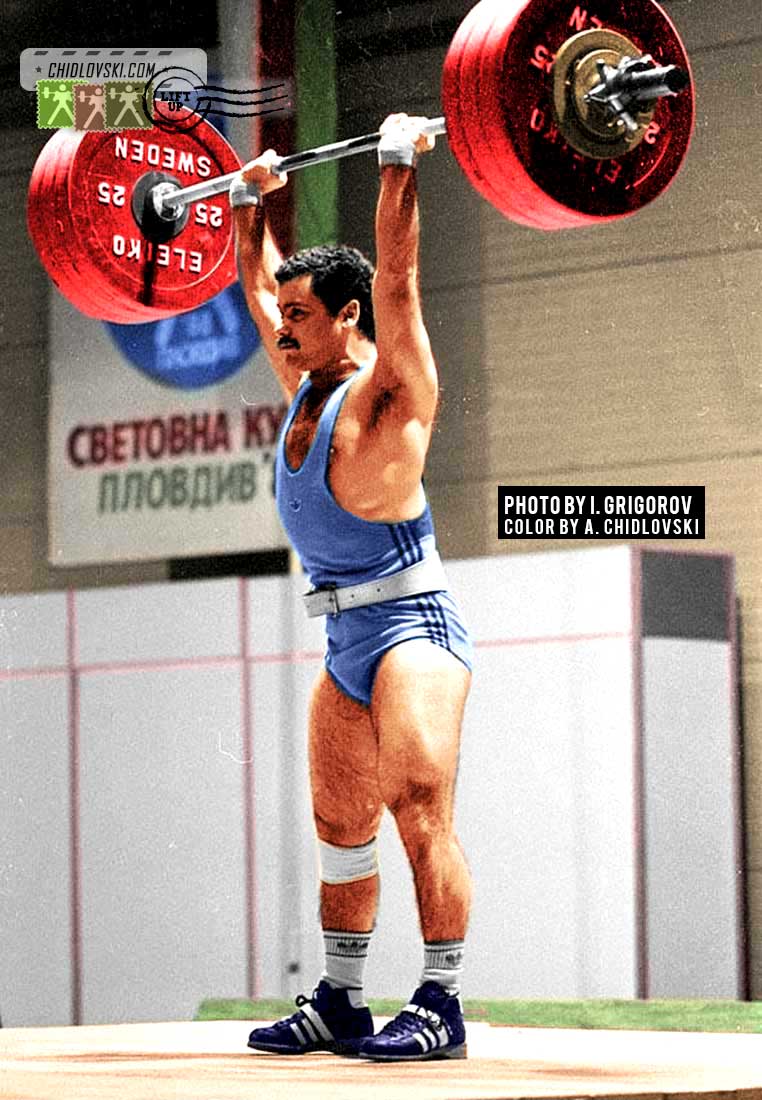 The History in Color features a color version of the photo of legendary Bulgarian Olympic weightlifter Stefan Topurov.

At 19, featherweight Stefan Topurov of Asenovgrad, Bulgaria launched a new era in Olympic weightlifting – Weightlifting 3.0, so to speak.

It happened on October 24, 1983 when Stefan clean-and-jerked 180kg in the 60kg class at the at the 1983 World Championships and became the first man in the world to lift 3x bodyweights.

Stefan Topurov (Bulgaria) was the first man in the history of Olympic weightlifting to lift 3 times bodyweight. It happend at the WC-1983 in Moscow where Topurov cj’d 180 kg in the 60 kg weightclass. Later he also liffted 182.5 and 185 kg at the Druzhba Cup in Varna Bulgaria.

Naim Sulemanolglu cj’d legendary 190 kg competing the 60 kg weightclass at the 1988 Olympics in Seoul. Needless to say, it wasn’t the first time when he lifted 3 times his bodyweight. First time he did it competing for Bulgaria when he lifted as Naim Suleymanov.

In the bantamweight (56KG)

In the featherweight (60KG)

No wonder, tiny and mighty Naim was nichnamed as “Pocket Hercules” by mass media. In 2001, his fellow Turkish athlete Halil Mutly also joined the club, when he succeded with the 168 kg clean-and-jerk at the European Championship in Trencin, Slovakia.

Competing at the 1988 Olympics, Angel Genchev cj’d a fantastic weight of 202.5 kg. He was the 4th man in the world to lift 3 times his body weight and he did it in the lightweight class (67.5 KG). However, later it was announced that he was disqualifies because of the usage of performance enhancing substance (furocemide).

And, finally, there is Yun-Chol Om from North Korea who lifted 168 kg for the gold in London, UK in the 56 kg weight category.