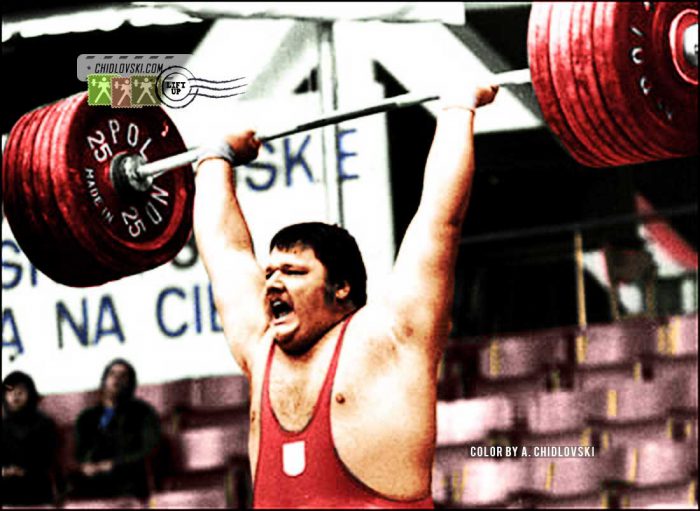 Robert Skolimowski had a very promising beginning of his career in Olympic weightlifting. At 19, he won the World title at the 1975 World Junior Championship in the super heavyweight with 355kg total (160+195). A year later, he totaled 367.5kg  (165+202.5) and won another World medal – a bronze medal at the 1976 World Junior Championship. Needless to say, the gold in 1976 went to a 20-year old super heavyweight Leonid Taranenko of the USSR.

Robert Skolimowski was a 7x champion of Poland. Besides the 1980 Olympics, he had several distinguished performances at the top international tournaments including bronze medal at the 1986 World Championships in Sofia and at the 1986 Goodwill Games in Moscow.

Interestingly enough, according to Polish researcher Zbigniew Gorlewski, Skolimowski takes the all-time 2nd place in terms of competitions with the national Team Poland (54). Only super legend of Olympic weightlifting  Marian Zielinski had more (59)!

After retirement from competitions, Robert Skolimowski coached young weightlifters, worked as a bodyguard and was involved in the political campaign of Bronisław Komorowski. His daughter, Kamilla Skolimowska (1982-2009) won the 2000 Summer Olympics when she was 17 and became the all time youngest Olympic champion in hammer throw.