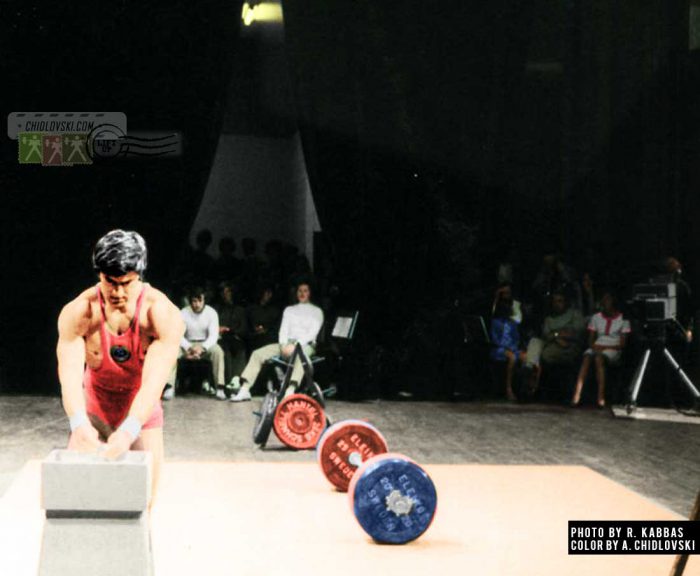 History in Color:
January 25, 1975, Christchurch, New Zealand – Weightlifting legend David Rigert of Team CCCP is getting ready to go for a world record in the snatch lift at the 1975 New Zealand Games.

This is a historical moment – for the first time ever, the light heavyweight athlete is about to snatch his double weight. And David Rigert did it!

The photo was taken by Robert Kabbas, outstanding Australian weightlifter and outstanding storyteller. So, I’ve asked him to comment on the photo.

Here goes the story by Robert

The Commonwealth Games in Christchurch 1974 were so popular that they decided to hold a “New Zealand Games” the following year and invited international athletes. In weightlifting, they contested only four categories – 67.5kg, 75kg, 90kg and Superheavy.  Kurentsov, Rigert and Alexeev were invited.

I think Kurentsov had retired but surprisingly Rigert and Alexeev accepted. Maybe they wanted to get away from the Russian winter. When they arrived, neither one was in great shape. They had taken some time off training and Rigert had lost a lot of weight, he was weighing around 84kg. He decided he wanted to try world records at 82.5kg (he was competing at 90kg since 1971) and the organizers added an 82.5kg category just for him.

He came down to under 82.5kg and started on 165kg first attempt! Which he made to break Ryzhenkov’s record then twice missed 170kg.

In the clean & jerk, he started on 200kg to break the total record but he had nothing left in the tank. He pulled the weight in 3 times but couldn’t stand up. But of course, we and the crowd loved it.