These Are Difficult Times 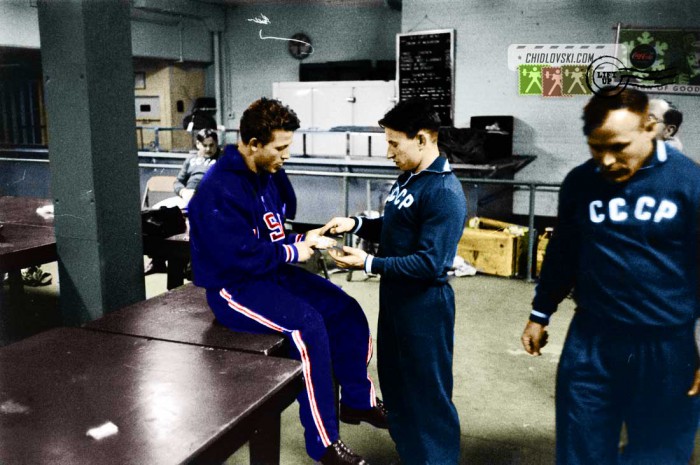 Those were the times of the end of the Cold war when the Chess musical was written.

The Cold War lasted over 4 decades and the core was the relationships between the two superpowers of the time, the U.S.A. and the U.S.S.R.

No one can deny that these were difficult times…

The weightlifting rivalry between the American and Soviet athletes took place from the beginning of the Cold War to its prime time.

In fact, it was the Team USA Weightlifting that was the first ever U.S. sports team to go to Russia to compete against the Soviets. The milestone event took place in 1955 when Bob Hoffman of the York Barbell brought the strongest guys of America to Moscow for the U.S. vs. USSR Olympic weightlifting matches. The matches were held in Moscow and other major Soviet cities and it was a huge success. The Soviet fans fell in love with Paul Anderson, Tommy Kono, Dave Sheppard… The cheered for them as loud as they did for the Soviet athletes.

Bob Hoffman was the last person on the planet Earth to be accused of being a Communist sympathizer. But it was him who chimed in immensely into melting down the coldness between the nations. Started as a “no guts no glory” war on the competition platform, the U.S. vs. USSR weightlifting matches turned into an ongoing popular series of events held for many years. Both sides developed a respect and even friendship in many cases.

The enhanced cover photo from the Lift Up: History in Color series catches the casual moment before the beginning of the match in Philadelphia in 1958.

The centerpiece of the shot are Isaac Berger (USA) and Eugene Minaev (USSR) discussing the tricks of using the chalk powder for lifting.

Does it look like one of the biggest rivals in the history of this sport? In a few minutes they will compete against each other in the featherweight class (60kg).

Trofim Lomakin (USSR, 82.5kg) is passing by. He is preoccupied with his own problems.

In the back, the future national head coach Alex Medvedev is resting before competing in the heavyweight class.

No one can deny that these are difficult times…

What we don’t know if the new Cold War is about to begin again. Some even say it’s already on.

Perhaps, to stop the madness, we need wisdom, enthusiasm and willingness of those guys in the 1940s and the 1950s. Their reasoning was different depending on the person.

In some cases, it was an opportunity to make money.

Or pure human curiosity and natural desire to make friends.

Most of the guys on the photo are no longer around.

In fact, only Isaac Berger is alive. He lives in NYC and maybe sometimes remembers these conversations with his buddy Eugene Minaev.

Even the sport of weightlifting is going through hard times.

Perhaps, it’s our turn now to bring back the spirit of Olympic weightlifting and make the world a friendly place to live in.

On the photo below, Trofim Lomakin and his coach Alexander Bozhko are strolling along the streets of Philadelphia in 1958.