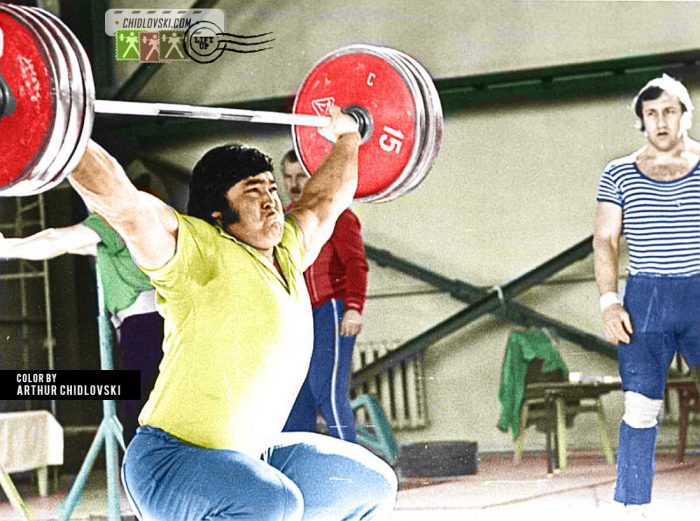 Sultan Rakmanov (1950-2003) won the Olympics in the super heavyweight competition in 1980 in Moscow when his legendary teammate Vasily Alexeev was eliminated after he failed three times to snatch 180 kg. Rakhmanov made six perfect lifts to score a decisive victory at the Olympics. He also won gold medals at the world championships in the super heavyweight class for the USSR team in 1979 and 1980.

Rakhmanov’s father was Uzbek and his mother was Ukrainian. He was born in Uzbekistan but most of his weightlifting career was associated with Dnepropetrovsk, Ukraine. Rakhmanov was a member of the Soviet national weightlfting team for 9 years. His most memorable victory was, of course, the super heavyweight class gold medat at the 1980 Olympics.

‘For that victory,’ – remembered Rakhmanov, – ‘I was awarded the Medal of Labor Red Banner in Kremlin and special Award in Kiev. As for money, I got 3,655 roubles but they didn’t make it home. We spent all in one of the Moscow restaurants’.

Rakhmanov’s strongest lift type was the snatch. His relatively weak performance in the clean-and-jerk didn’t allow him to dominate the world in the super heavyweight class for a long time. His performance at the Olympics in 1980 was a peak of his career in weightlifting. Overall, Rakhmanov was rather an “interim champion” marking a transition from Alexeev’s era in weightlifting to the upcoming time of world class super heavyweight lifters like Pisarenko, Kurlovich, and Taranenko in the 1980’s.

After his retirement, Rakhmanov was the Chairman of the International Association of Disabled Sports Veterans division in Dnepropetrovsk, honored President of the Aikido Federation of Ukraine. He also was one of the pioneers of organized armwrestling in the Soviet Union.

On the cover photo enhanced in color for the Lift Up, Sultan performs the power snatch lift with Olympic champion Valery Shary of Minsk watching the lift in the background.