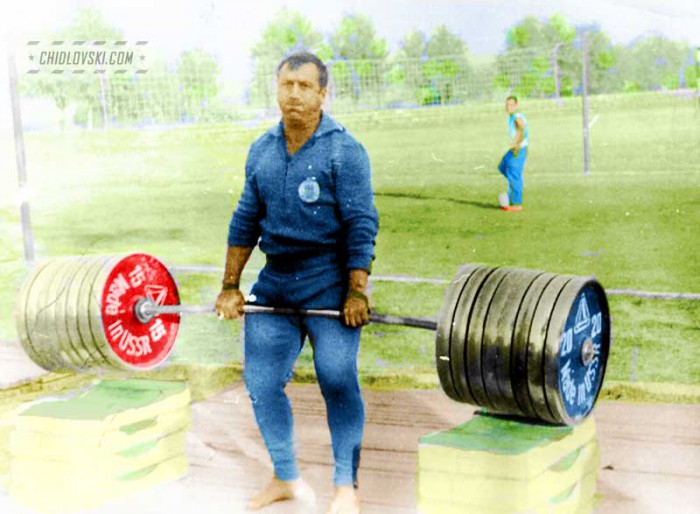 The enhanced archival photo depicts the coach of Team Bulgaria Ivan Abadzhiev doing a high pull of 300kg (660 lbs) in the training camp.

The boy at the volleyball court behind Abadzhiev looks impressed. Perhaps, he is trying to make a choice between the soccer and volleyball. Instead, his mind is changing towards the Olympic weightlifting.

I don’t know. I am just looking at the photo and guessing.

I don’t know the date the this photo is made. My guess it is mid to late 1970s. Abadzhiev is in his 40s. The old Russian “leningradka” weights. Made in USSR…

As a competitive weightlifter, Ivan Abadzhiev won silver medal at the 1957 World Championship in the light weightclass. He competed for many years for the Bulgarian national team.

As a coach, he led Team Bulgaria for two decades. Later, he coached Turkish team. He prepared 12 Olympic champions, 13 silver and 5 bronze medalists of the Olympics, 57 world champions and 64 European champions.

Last but not least, he authored the so-called “Bulgarian System” of training that revolutionized and streamlined the training process back in the early 1970s.

From the prospective of weightlifting federations, he is an outlaw now. Persona non grata. In the United States, there was an official ban for allowing him to train or present lectures in the U.S. weightlifting facilities. Nevertheless, his training and public speaking sessions were attended with a full house.