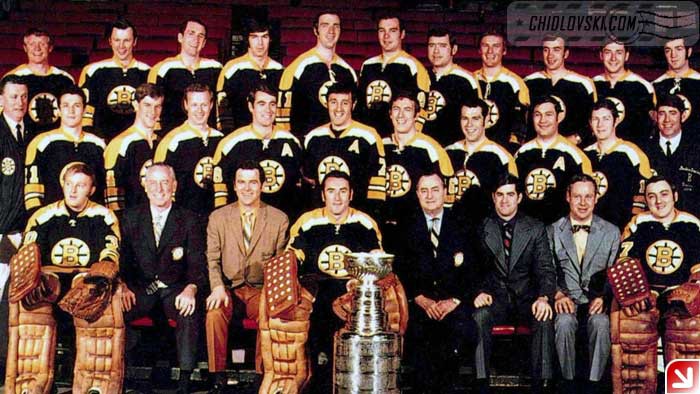 In the 1969-70 Season, Boston Bruins won their 4th Stanley Cup. Being an expert on international hockey, I find many familiar faces and names in the team photo featuring the Bruins personnel in the championship season. Many of them took part in the first NHL level world tournaments in the early 1970s.

Harry Sinden was the head coach of Team Canada 1972. Ed Johnson, Phil Esposito, Don Awry, Wayne Cashman and Bobby Orr were selected to play for Team Canada in the 1972 Summit Series. John Forristal was actually the guy who escorted Alan Eagleson to Team Canada’s bench in Game 8 in Moscow when the “Eagle” was almost arrested by the Soviet police. According to Eagleson, it wasn’t him but Forristal to be blamed for the middle finger hello to the Soviet fans when they were walking on the ice. Phil Esposito became an instant hero in Russian hearts and Soviet players even asked for his autographs in the shower stall after they lost the Series.

In 1969-70, Bobby Orr won his 3rd straight Norris Trophy. He dominated the NHL in scoring won also the Hart Trophy . The Bruins finished 2nd with a 40-17-19 record. In the first round of the playoffs, they battled against the NYR as they split the first four games. They managed to straighten out and win the next 2 games. In the semifinals, the Bruins scored 20 goals against Chicago Blackhawks in a four game sweep.

In the finals, the Bruins dominated versus the St. Louis Blues. They won the first three games by a combined score of 16-4. With their first cup in 29 years in reach, the Bruins were taken to overtime. Bobby Orr scored his unforgettable goal by flying through the air 40 seconds into overtime. Orr won the Conn Smythe trophy for his outstanding playoff performance.