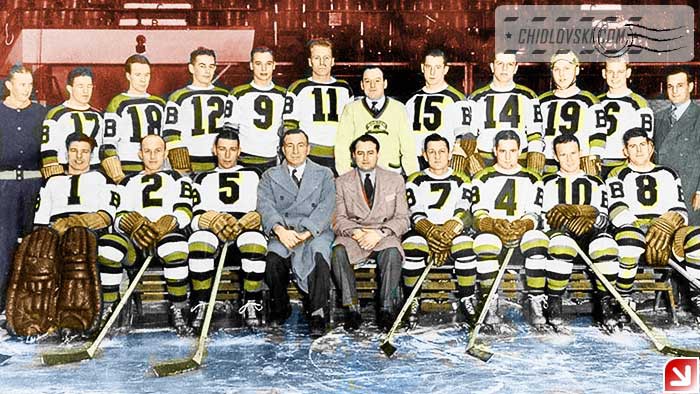 The cover photo introduces the reconstructed team photo of Boston Bruins  in the 1938-39 Season. By many accounts, it was the strongest and most exciting Bruins team in the pre World War II era. It was considered the beginning of the dynasty of Bruins that was interrupted by the was when several key players of the Bruins went to serve their countries in the war against Nazi Germany.

The season started with a big surprise when Boston fans favorite Tiny Thompson was sold to the Detroit Red Wings early in the season and American rookie goalie Frankie Brimsek took over in net. Brimsek had a spectacular season – he won both the Calder and Vezina Trophies.  He had 10 SO’s in the regular season and became known  as “Mr. Zero”. The Bruins finished 1st  in the NHL with a 31-12-5 record.

In the semifinals vs. the New York Rangers, the Bruins got  three overtime goals (including one in Game 7) from on Mel Hill who earned the “Sudden Death” nickname after his clutch performance . In the finals, the Bruins  managed to beat the Toronto Maple Leafs in five games and won their second Stanley Cup.