Open Letter to the IOC by Gorbachev 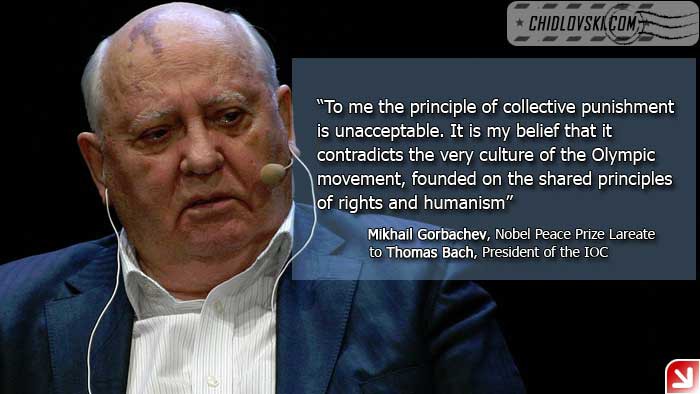 Mikhail Gorbachev wrote an open letter to Thomas Bach and the International Olympic Committee on behalf of Russia.

Mikhail Gorbachev is the Nobel Prize Laureate. He was the first and the last President of the Soviet Union.He was the mastermind of the downfall of communism in Russia, destroying the Iron Curtain  and bringing democracy to Russia.  By many accounts, people’s opinions in Russia on him are split. Some can’t forgive him for destroying the great empire. Some praise him for the changes he brought to Russia.

I happen to consider Gorbachev to be a great person who had one of the most profound influence on me, on my life philosophy and on my stand points. Needless to say, that during perestroyka and glasnost era of Gorbachev, there were great changes made in Russia and sports wasn’t the area of big concern and focus of Gorbachev.

There were bigger issues to resolve than taking care of the sports. In fact, sports was a victim of transition from Soviet economy to capitalism. The only ones who earned were Russian super stars who were able to free from the state control and sign lucrative contracts with professional sport clubs abroad. The NHL hockey stars from Russia are the first example that comes in mind. The investment to sports fell down enormously.  The whole infrastructure of sports, youth sport, sports arenas and training facilities were neglected and were let to flow down.

Perhaps, it was the time when the whole issue if doping and using banned substances were let go and in many ways went out of control. The philosophy of whole world of sports was to fight drugs and PEDs. It was a money and time consuming process to commit sports to go into a drug free direction. Russia couldn’t really afford to follow this path in the time of survival in the country.

The athletes used old trends and views on sports that used to bring huge success for Soviets at the Olympics in the past decades. With times changing, the old trends needed to be upgraded and even changed drastically. In many cases, those became rudimentary and outlawed by sports  authorities. The results are obvious. It was let to the recent scandals and even to the unthinkable steps that might ban Russia from going to the Olympics.

I really want the open letter by Gorbachev to be read and heard.

To be heard by both the IOC and the Russian sports authorities.

It’s too much to ban all from Russia to participate from the Olympics. Olympic movement shouldn’t be about about punishing everybody regardless of their guilt. It should be progressive and growing…

And it’s too much to involve FSB like services in secret cheating activities with testing samples in the late night hours. It’s comical and crazy at the same time! Serious changes should be made in and for sports – not just these quick fixes and booze parties in the Russian Houses in the Olympic village.